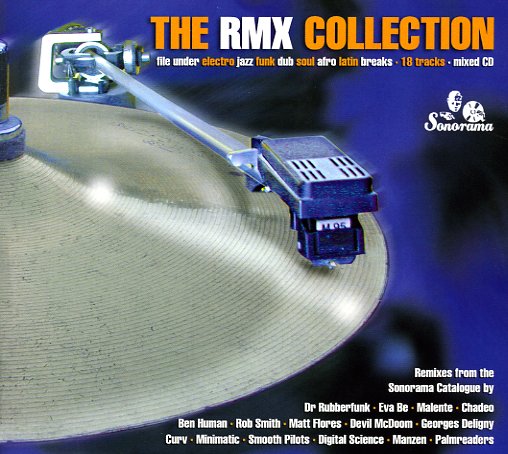 A stylistically rich set of remixes of the deep grooves mined over the years by Berlin's Sonorama label – killer jazz, funk, soul and Afrobeat material – remixed and spliced with club grooves, hip hop beats, electro free range funk by Eva Be, Rob Smith, Ben Human, Dr Rubberfunk, Smooth Pilots and others! The range is pretty incredible, and it's loaded with deep material! The CD version features 18 tracks from all over the Sonorama catalogue, a number of which are previously unreleased, with titles including "Hang 'Em High" (Chadeo re-edit) by Memphis Black, "Massai" (Dr Rubberfunk re-spice) by Mombasa, "Exotic Drums" (Devil McDoom rmx) by Berry Lipman, "Sax On The Rocks" (Minimatic rmx)" by Berry Lipman, "Happy Little Sunbeam" (Ben Human rmx) by the Elsi Bianchi Trio, "You And I" (Rob Smith rmx) by Gretje Kauffeld, "Dreaming" (Ben Human rmx) by Edgar Schlepper and more.  © 1996-2021, Dusty Groove, Inc.
(Out of print.)

Alright! – Black American Dance Music From The Disco Era
BGP (UK), Mid 70s. Used
CD...$11.99
A tight collection of uptempo funk and disco-driven soul tunes – with a selection that goes way past the usual dancefloor favorites! We're not sure how to read the title (which seems to have some sort of "inside take" on black culture in America) so we'll write that off to the ... CD

Greg Belson's Divine Disco – American Gospel Disco 1974 to 1984
Cultures Of Soul, Late 70s/Early 80s. Used
CD...$5.99 (CD...$6.99)
Think disco sounds only hit the dancefloors in the 70s? Think again – because this killer collection brings back a whole host of club-sounding gospel tunes from the time – proving once again that soul and gospel records have always gone hand in hand over the years! The vibe isn't ... CD

If You're Not Part Of The Solution – Soul, Politics, & Spirituality In Jazz 1967 to 1975
BGP (UK), Late 60s/Early 70s. Used
CD...$9.99
Righteous jazz, but with a bit of a funky twist too – a great selection of classics from the years when 60s soul jazz was reaching out with a new sense of pride and power, and finding a way embrace all of the musical changes that were coming its way! The music here is often by artists who ... CD

Trust The DJ – Patrick Forge PF02
Trust The DJ (UK), 2002. Used
CD...$8.99
Sweet jazzy funk from the godlike hands of Patrick Forge – one of the biggest influences on the Dusty Groove sound over the past decade, and a DJ that we rank right up there with Gilles Peterson! Patrick's second set of tracks for the Trust The DJ series is even sweeter than the first – ... CD