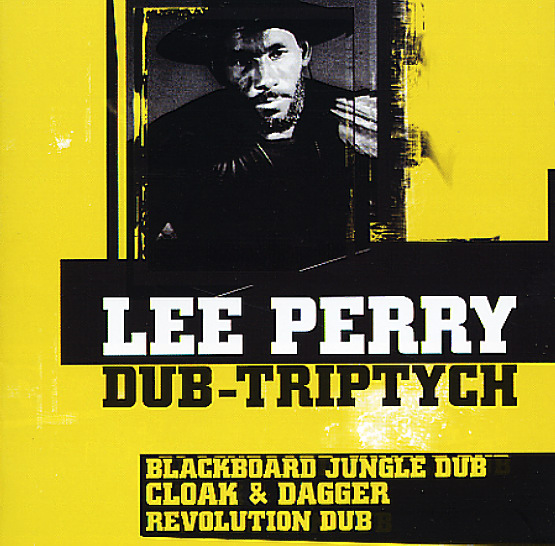 Three dub classics, two of them impossible to get for years, except for the occasional "unofficial" LP repressing. On the first LP of the set, Scratch teams up with the great Tommy McCook for one of his hardest to find gems, recorded in the late 70s, when his wigged out follies at the Black Ark had reached their peak, and though there's a bit of debate over whether these tracks were actually recorded at the Black Ark, this was originally one of the first LPs issued after the studio burned to the ground. In any case, you can't argue with the tracks on this one: spare instrumentals with jaunty guitar, loping syncopated drums and bouncing bass, a baker's dozen tracks, including "Cloak & Dagger", "Musical Transplant", "Liquid Serenade", "Iron Claw", "Rude Walking", "Caveman Skank" and "Pee-Wee Special". Blackboard Jungle Dub, the second album of the triptych, is widely cited as the first full length dub LP, though we'd rather not get too academic about it. Besides, this is one mighty set of Perryisms, wrought in the pre-Black Ark era, with a dozen of the Upsetter's finest rhythms rendered in dub versions here, and with King Tubby reportedly responsible for the wonderful reverb and mixing console action taking these tracks to the next level. An essential dub masterpiece, with 14 tracks on this version of the LP, including "Black Panta", "Khasha Macka", "African Skank", "Dreamland Skank", "Jungle Jim", "Dub Organizer", "Apeman Skank" and "Jungle Fever". The third album included is another tough one to get, originally issued in a tiny, tiny batch, though it's been bootlegged more than a few times over the years. 10 tracks in all, a tasty stew with that Black Ark groove running through it pretty heavily, with some nice guitar and a really spare approach to the often murky Perry tone poetry. Includes "Dub Revelations", "Womans Dub", "Kojak", "Doctor On The Go", "Bush Weed", "Dreadlock Talking", "Own Man", "Dub The Rhythm", "Black Hand" and "Rain Drops".  © 1996-2021, Dusty Groove, Inc.
(Out of print.)