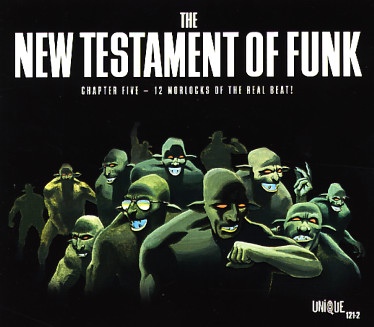 New Testament Of Funk 5 – 12 Morlocks Of The Real Bite

The first really well-titled volume of this series – because this time around, the sound is a lot funkier than before! Over the past few years, Unique Records have been moving more strongly into funk-based territory – shedding some of their more dancefloor-oriented styles for heavier beats, bass, and some of the put-together funky modes of labels like Tru Thoughts or Melting Pot. There's still a bit more of a playful groove going on here – that undeniable Unique sense of humor – but the tunes here have a bit more focus and bite than before, both qualities we can really appreciate! CD features a number of previously unissued titles, plus others that are on CD for the first time – and tracks include "Living Phenomenons" by The Saint with Mr Man, "Lost Luggage" by Bandura, "Cabaret (Cartoonfish rmx)" by Greeje Kauffeld, "Sniffin & Snatchin" by The Soul Snatchers, "Do It Right" by The Sweet Vandals, "You'll Never Know What You Can Do" by Oscar Madison, "One Man Show" by Swell Session with Paul MacInnes, and "Seven Seven" by The Break A Lick Cooperation.  © 1996-2021, Dusty Groove, Inc.
(Out of print.)

Songs For You
Unique (Germany), 2002. Used
CD...$2.99
A fantastic bit of keyboard grooving – the third and best album by the Xaver Fischer Trio! The format is very simple – just classic-sounding electric keys, played in tandem with bass and drums, plus some occasional extra touches. The approach is great – kind of like a Ramsey ... CD