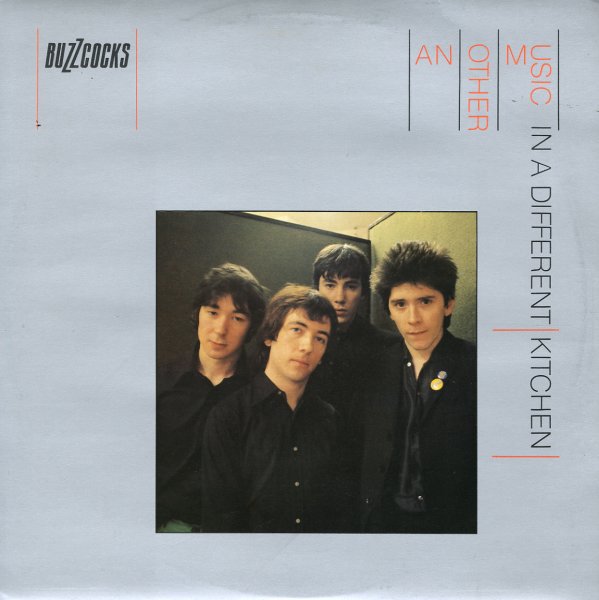 Another Music In A Different Kitchen (with bonus tracks)

The fantastic first full album from The Buzzcocks – a group who'd already set the UK scene on fire with a flurry of amazing singles at the start of the punk generation! Here, they amazingly keep up all the great energy of their 7" releases – moving at a blistering pace throughout, with more focus than the Sex Pistols in their instrumentation, and a mixture of drum, bass, and guitar interplay that virtually became the blueprint for the whole west coast hardcore scene to come! Pete Shelly has never sounded so sinister, and the mighty Martin Rushnet puts the whole thing together with beautifully lean production – on classics that include "Fast Cars", "No Reply" "Get On Our Own", "I Don't Mind", "Autonomy", "Love Battery", "I Need", "Moving Away From The Pulsebeat", and "Fictionromance". UK pressing includes 4 bonus tracks originally released as 7" singles.  © 1996-2021, Dusty Groove, Inc.
(Out of print, 1996 UK pressing in a foldout digipack. Cover has light wear.)

Forms & Feelings
EMI (UK), 1969. Used
CD...$4.99
Wonderful work from Love Sculpture – a heavy British trio from the end of the 60s – and one that features a young Dave Edmunds on guitar! There's a slight bluesy undercurrent in Dave's style, but the music also has that tightly compressed sound that would emerge more strongly during ... CD

Is This Desire
Island, 1998. Used
CD...$2.99
A real standout from Polly Jean Harvey – a set that somehow manages to have all the intensity of her previous records, but which hones things down to a mode that might well be called mellow at times – but which, to us, also seems to really give the music clarity, and maybe a more ... CD