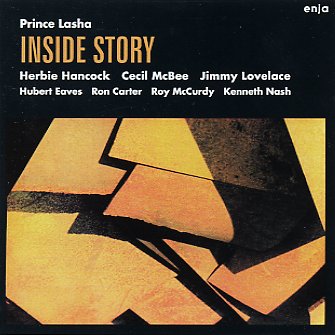 A rare treasure from spiritual reedman Prince Lasha – a session recorded in 1965 in New York, but one that wasn't issued until many years later by the Enja label in Germany! The album is a real revelation – and clearly marks Lasha as one of the key artists unlocking the more spiritual sounds in jazz at the time – taking off nicely from the later work of Eric Dolphy, and dovetailing with some of the best experiments of John Coltrane – but at a level that maybe even leapfrogs into more 70s modes as well! The group here is great – a quartet with Herbie Hancock on piano, Cecil McBee on bass, and Jimmy Lovelace on drums – and Lasha plays both alto and flute, in modes that echo his best work with Sonny Simmons, and on his later solo albums too. Titles include "Ethereal", "Flight", "Kwadwo Safari", "Mary", and "Inside Story".  © 1996-2022, Dusty Groove, Inc.
(Part of the Enja 50th Anniversary Campaign!)