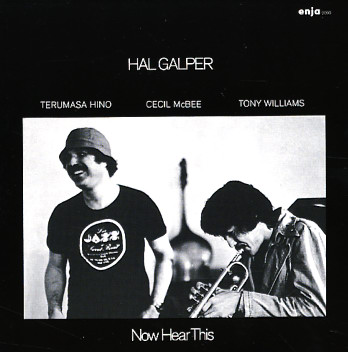 Fantastic stuff – one of pianist Hal Galper's best non-electric sets of the 70s! Galper's working here with a quartet – playing piano in a group that includes Terumasa Hino on trumpet, Cecil McBee on bass, and Tony Williams on drums – all astounding players who really make the album sparkle with even more energy than some of Hal's great early 70s material on the Mainstream label. And with a rhythm section that hip, Terumasa Hino lays out some of his best work in years – searing trumpet solos over the top, stretched out but never too sloppy, as the tracks always maintain a strong rhythmic pulse and a lot of soul. Titles include "Shadow Waltz", "Mr Fixit", "First Song In The Day", and "Red Eye Special".  © 1996-2021, Dusty Groove, Inc.
(Part of the Enja 50th Anniversary Campaign!)

Speak With A Single Voice (with bonus track)
Enja/Solid (Japan), 1979. New Copy
CD...$13.99
A great little album from pianist Hal Galper – a set that's strong not only for his own great work on piano, but also for returning the Brecker Brothers to a straighter jazz world, during a time when they were turning out tight jazz funk records on their own! Both the tenor of Michael ... CD