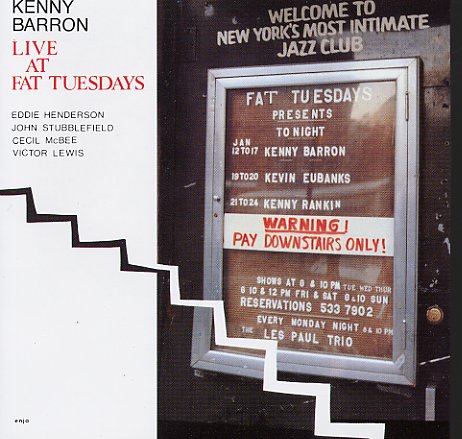 Soulful genius from Kenny Barron – an excellent quintet outing from the late 80s, and one that really benefits from the presence of horns added to the trio! Kenny's work on piano is always great – and his sense of scope, soul, and timing are presented perfectly here – but what we really appreciate is the way that Eddie Henderson's trumpet and John Stubblefield's tenor flesh out the longer tunes on the set, and bring in even more colors that Barron's own writing and performance. The rest of the quintet features Cecil McBee on bass and Victor Lewis on drums – and tracks include the great originals "Lunacy", "518", and "Sand Dune" – plus "There Is No Greater Love" and "Misterioso".  © 1996-2021, Dusty Groove, Inc.
(Part of the Enja 50th Anniversary Campaign!)

Quickstep
Enja/Ultra Vybe (Japan), 1991. New Copy
CD...$13.99
One of those great Kenny Barron records from a time when it seemed like the pianist could do no wrong – effortlessly turning out great sessions like this, with such prolific energy that it's sometimes hard to remember them all! Yet even so, Quickstep is a real standout – a record that ... CD