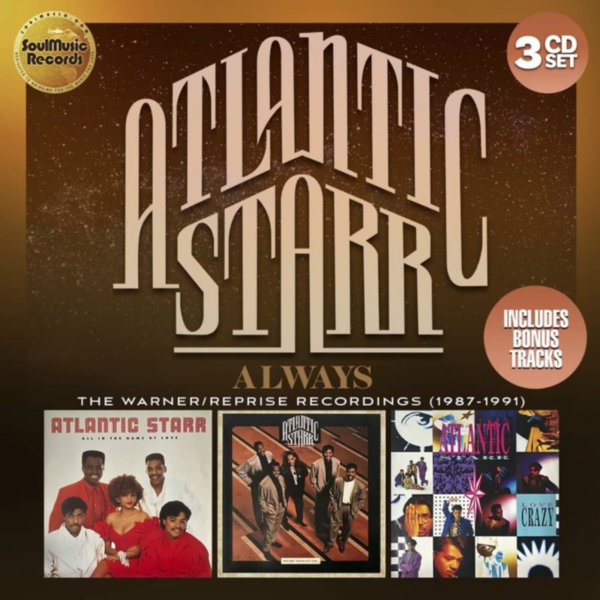 Three full albums from Atlantic Starr – with lots of bonus tracks too! All In The Name Of Love has Atlantic Star at the height of their catchy commercial fame – bouncing along with rhythms that crossover nicely to the mainstream, yet still keep a bit of their previous funky edge intact! The groove here is almost in the style that Atlantic Starr inspired in so many other younger groups in the earlier part of the 80s – although it's also a bit more polished too. Most instrumentation is electric, and tunes are mostly written by the team of David and Wayne Lewis – both of whom sing on the record. Barbara Weathers also handles female vocals, and titles include "Once Lover At A Time", "Let The Sun In", "My Mistake", "I'm In Love", "Always", "Don't Take Me For Granted", and a version of Sam Dees' "All In The Name Of Love". We're Moving Up is one of the last in a long run of 80s hits from Atlantic Starr – a group who were already moving up the soul charts before the release of the album! The set continues their move into commercial territory started a few records before, but it also shakes loose of some of the colder sounds of 80s soul – and picks up a somewhat warmer vibe on the keyboards and rhythms. Porscha Martin sings female vocals with the group, and titles include "Under Your Spell", "Love Ain't Fair", "Woman's Touch", "We're Movin Up", "My Sugar", "You Deserve The Best", and "Don't Start The Fire". Love Crazy is a set that's got a nice change in groove from Atlantic Starr – a sound that's still got a lot of their best elements intact, but which also seems to bring on some of the best elements that were being introduced by the British scene too! Rhythms at points are maybe more in the Soul II Soul or Lisa Stansfield modes – which makes for some great tunes that really reinvigorate the group and update them for a new jack generation, while still holding onto the charms of the past. A few moments get more in a mellow quiet storm sound – all with the balance that made earlier Atlantic Starr albums classics – on titles that include "Love Crazy", "Hold On", "Masterpiece", "Girl Your Love's So Fine", "I Can't Wait", "If You Knew What's Good For You", and "Come Lover". 3CD package features all albums in tiny LP-styled jackets – with bonus tracks that include "One Lover At A Time (ext)", "Always (edit)", "Let The Sun Shine IN (ext rmx)", "All In The Name Of Love (single)", "My First Love (ext)", "Bring It Back Home Again (Joe Smooth ext mix)", "My First Love (7" edit)", and "Bring It Back Home Again (Joe Smooth underground mix)".  © 1996-2021, Dusty Groove, Inc.