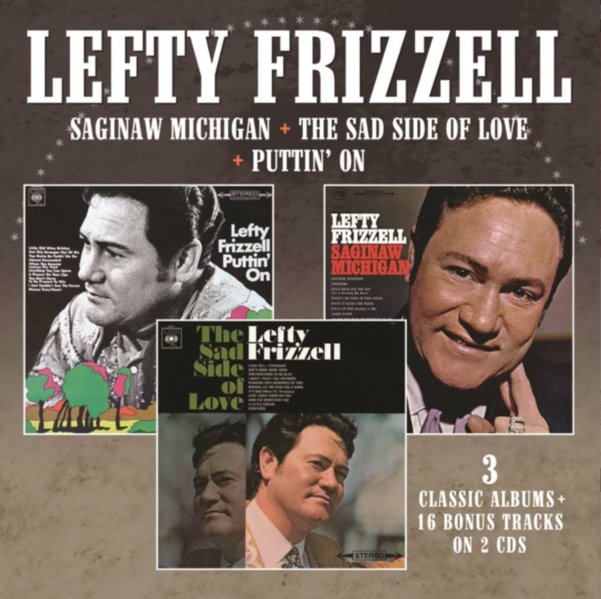 A trio of albums from the great Lefty Frizzell – plus lots of bonus tracks too! First up is Saginaw Michigan – Fantastic 60s work from the great Lefty Frizzell – issued at a time when he was back on the top of the charts with the fantastic title track, and able to really stretch out and do great things with his amazing voice! Lefty's still got the edge of the honky tonks, but has also aged and weathered a bit too – a quality he really brings to the lyrics, and makes the tunes sparkle with even more depth and charm than before – still able to pen some great material on his own, which is nestled in here amidst some well-chosen tracks by others. Titles include the great "Sagniaw Michigan", plus "What Good Did You Get", "There's No Food In This House", "Lonely Heart", "Don't Let Her See Me Cry", "When It Rains The Blues", "Hello To Him", and "James River". The Sad Side of love has Lefty Frizzell taking on a whole host of heartbreaking tunes, but delivered with that special kind of charm that always set him apart from the rest – a guy who's able to take life's punches, but maybe learn a bit in the process – a quality he really brings to the great batch of material on the set. As usual, Lefty contributed a number of great songs to the record himself – and titles include "Preparations To Be Blue", "She's Gone Gone Gone", "Running Into Memories Of You", "I Don't Trust You Anymore", "A Little Unfair", "I Can Tell", "It's Bad", "Confused", and "Woman Let Me Sing You A Song". Puttin On is a record with a slightly psychedelic cover, but a set that's got the best sound of Lefty Frizzell in the 60s – that amazing voice, matured like rich wine – set to a well-chosen batch of tunes that includes a few hits plus some great lesser-known material! Lefty sounds great throughout – taking on tunes like "Little Old Wine Drinker Me" and "Almost Persuaded", and making them his own – then moving onto tunes that include "Get This Stranger Out Of Me", "I Just Couldn't See The Forest", "A Prayer On Your Lips", "Anything You Can Spare", and "Heart". 2CD set also features a whopping 16 bonus tracks – lots more 60s gems from this sometimes-overlooked part of Lefty's career – titles that include "What Am I Gonna Do", "Honky Tonk Stardust Cowboy", "Make That One For The Road", "Writing On The Wall", "Everything Keeps Coming Back", "Wasted Way Of Life", "An Article From Life", and "The Rider".  © 1996-2021, Dusty Groove, Inc.

Rare Conundrum (with bonus tracks)
EMI/Virgin (UK), 1977. New Copy
CD...$8.99 11.99
A great late 70s set from Bert Jansch – a set that's maybe a bit of a return to his roots, but which also really marks Jansch as a much stronger vocalist than he ever was in the early days! There's this confidence and maturity to the lyrics that's really great – Bert inflecting things ... CD