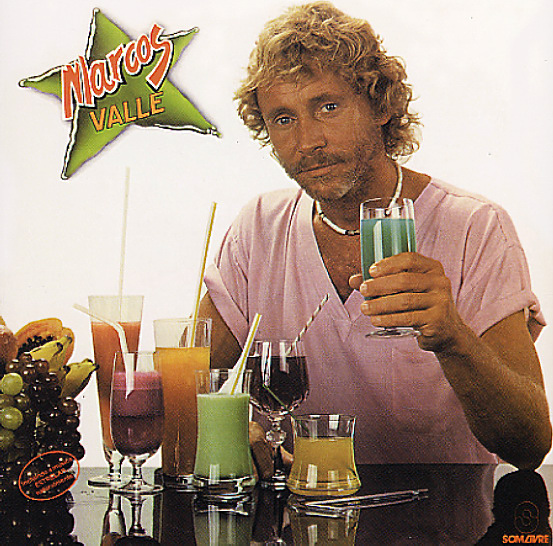 Marcos Valle might look a bit sad and forlorn with all those fruity drinks on the cover – but the record itself is a wonderfully upbeat session, and one that's very much in the same modern soul mode of his 80s groove Vontade De Rever Voce! As on that record, the sound here shows strong traces of Marcos' early 80s collaborations with Leon Ware in California – and the overall groove is a nice mix of boogie, two step, and smoother soul – a genre that we never would have expected during Valle's bossa years, but which comes off tremendously well here! There's lots of warmly stepping bass amidst smooth jazzy horns – and the tracks all have a compressed groove that keeps things nice and crisp – plenty classy, in a way that's supremely appealing if you dig early 80s mellow soul. Titles include a remake of "Viola Enluarada", plus "Naturalmente", "Estrelar", "Samba De Verao", "Dia D", "Mals Que Amor" ,"Fogo Do Sol", "Tapa No Real", and "Tapetes Guardanapos Cetins".  © 1996-2022, Dusty Groove, Inc.
(Indie exclusive mint green colored vinyl pressing!)

Carolina (clear vinyl pressing)
Mr Bongo (UK), 2002. New Copy (reissue)
LP...$24.99 27.99 (LP...$25.99, CD...$6.99)
A HUGE batch of samba-soul grooves from Seu Jorge! Jorge previously knocked around Brazil as a member of the late 90s pop group Farofa Carioca, but his first solo outing is a massive step forward into the upper echelon of the Brazilian scene! Like the best of his contemporaries, Jorge uses the ... LP, Vinyl record album

Azimuth (Linha Do Horizonte) (180 gram vinyl)
Som Livre/Far Out (UK), 1975. New Copy Gatefold (reissue)
LP...$24.99 30.98
One of the sweetest electric records to come from 70s Brazil – the fabulous first effort from the Azymuth trio, and work that's hardly been matched again! Although the group here have plenty of the warm keyboard touches of their more famous later work, they're also moving in territory that's ... LP, Vinyl record album

Carolina
Mr Bongo (UK), 2002. New Copy 2LP
LP...$25.99 27.99 (CD...$6.99, LP...$24.99)
A HUGE batch of samba-soul grooves from Seu Jorge! Jorge previously knocked around Brazil as a member of the late 90s pop group Farofa Carioca, but his first solo outing is a massive step forward into the upper echelon of the Brazilian scene! Like the best of his contemporaries, Jorge uses the ... LP, Vinyl record album