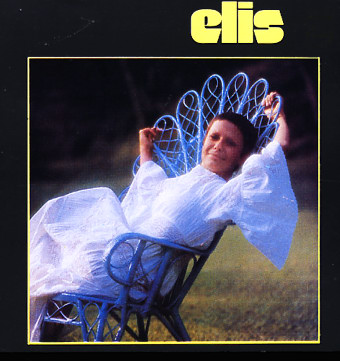 A stunning step forward for the great Elis Regina – and a landmark record that would set the stage for most of her final work to come in the 70s! The album's got less of the jazz or bossa inflections of her music from the 60s – and instead moves into this richly sophisticated style that seems to unlock endless new corners in her vocals – that emotive, expressive depth that instantly made Elis one of the most powerful forces of her time – an artist revered by both hipsters and the mainstream. Partner Cesar Camargo Mariano handles all the backings – again moving past his own bossa roots too – and titles include "Bala Com Bala", "Mucuripe", "Vida De Bailarina", "Atras Da Porta", "Cais", "20 Anos Blue", and a nice spare version of "Aquas De Marco".  © 1996-2022, Dusty Groove, Inc.
(New 2021 remaster!)

Elis (1966)
Philips/Universal (Japan), 1966. New Copy
CD...$7.99
An excellent early gem by one of Brazil's greatest singers! The record captures Elis Regina at a prime early stage – when her voice was raw and filled with emotion, and when she was backed by some excellent arrangements that blended jazz, bossa, and more complicated vocal settings. The ... CD

Dinamo
Deck Disk (Brazil), 2020. New Copy
CD...$9.99
A really fantastic album from the great Lo Borges – and proof of that long-running adage about Brazilian singers – they never falter as they age, and most seem to be able to hold onto all that made them great in the first place – at a level that's very different from artists on ... CD

Ely Arcoverde Quarteto
RGE/Discobertas (Brazil), 1965. New Copy
CD...$12.99
One of the coolest albums ever from this hip Brazilian organist – a set that just features a small combo behind his lead work on the keys – in a mode that ties the album more strongly to the world of samba and bossa jazz than any of his other records of the decade! There's still lots ... CD

Rita Lee (1982)
EMI (Brazil), 1982. New Copy
CD...$12.99
A mighty big record for the lovely Rita Lee – very different than anyone might have guessed back when she was a member of Os Mutantes! Here, Rita has risen to the top of Brazilian pop stardom – and is serving up these really catchy little tunes that have her voice sound every bit as ... CD

Build Up – Serie Estreia
Polygram (Brazil), 1970. New Copy
CD...$12.99 19.98 (LP...$25.99)
The first solo album by Rita Lee – cut back when she was a member of the groundbreaking Tropicalia trio, Os Mutantes! The album's got a very different feel than her work with that group – and has Rita stepping out as a sophisticated pop singer, almost in the way that Nico did on the ... CD