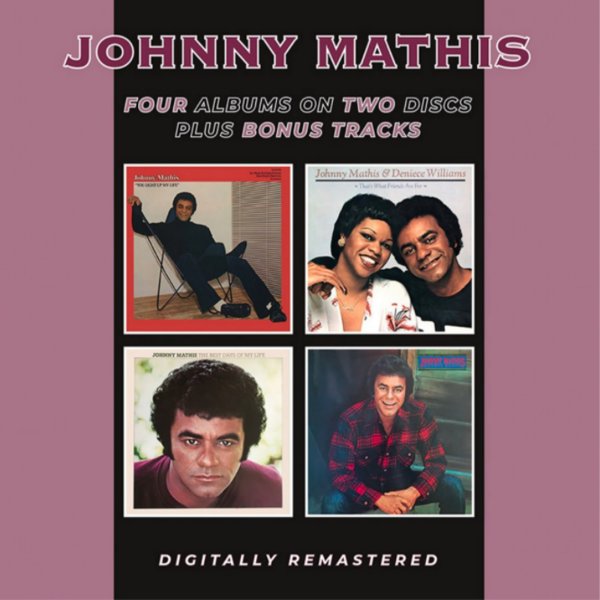 A quartet of late 70s albums from Johnny Mathis – back to back in a single set! You Light Up My Life is mellow magic from Johnny Mathis – a late 70s set that updates his older style for a crossover audience in adult contemporary! The style is smooth and polished, but never so much so that Johnny's amazing voice can't shine through – thanks to soulful arrangements from Gene Page, who'd done plenty of work with hipper soul artists in the 70s – and Deniece Williams makes a great guest appearance on a number of tracks – really bringing Mathis into that duet style that would hit even bigger for the singer in the 80s. Titles include "If You Believe", "To Much Too Little Too Late", "How Deep Is Your Love", "It Was Almost Like A Song", and "Till Love Touches Your Life". That's What Friends Are For is a superb set of duets between Johnny Mathis and Deniece Williams – a set that's a key part of Johnny's rise into soul music during the 70s, and one that also forms a cornerstone of the early career of Deniece Williams too! Williams' soaring vocal range is a great match for the trademark Mathis modes – and the pair take on some great tunes that are mostly in a midtempo groove, which allows for all this fantastic interplay between the vocals – at a level that really shows what the duo can do together, and how they're not just two superstars who happened to be in the same studio. Titles include "You're All I Need To Get By", "Ready Or Not", "Touching Me With Love", "Me For You You For Me", and "Until You Come Back To Me". Best Days Of My Life features Johnny Mathis at the end of the 70s – still working in some of the best soul modes he explored during the decade, but also reaching forward in a more adult sort of style too! The album has Mathis working with arrangements from Gene Page – who balances things between some fuller soul numbers that have Johnny hitting a few groovier styles, and some mellower moments that preface the move he'd make towards adult contemporary in the 80s – but with a bit more of a laidback approach. Songs are from a variety of sources, and include a few nice remakes of older standards – and titles include "Gone Gone Gone", "The Bottom Line", "The Last Time I Felt Like This", "Begin The Beguine", "As Time Goes By", and "There You Are". Mathis Magic has a nice sort of bite at times – Johnny breaking out of just mellow modes, and getting a bit of inspiration from Gene Page, who handled the arrangements for the set. A few tunes almost kick into a clubby sort of vibe, in which Johnny's vocals soar nicely – and titles include "Love", "Night & Day", "My Body Keeps Changing My Mind", "No One But The One You Love", "To The Ends Of The Earth", and "Heart Soul Body & Mind". 2CD set features bonus tracks – "I Never Said I Love You", "So Deep In Love", "Without Us", and "Comme Ci Comme Ca".  © 1996-2022, Dusty Groove, Inc.

Up Up & Away/Love Is Blue/Those Were The Days/Sings The Music Of Bert Kaempfert
Columbia/BGO (UK), Late 60s. New Copy 2CD
CD...$16.99 22.99
A quartet of albums from Johnny Mathis – served up here in a special 2CD set! Up Up & Away is Mathis' first set back at Columbia after a brief hiatus – a record that shows a newly mature style that's wonderfully suited for Johnny's amazing voice! Mathis tones are every bit as ... CD