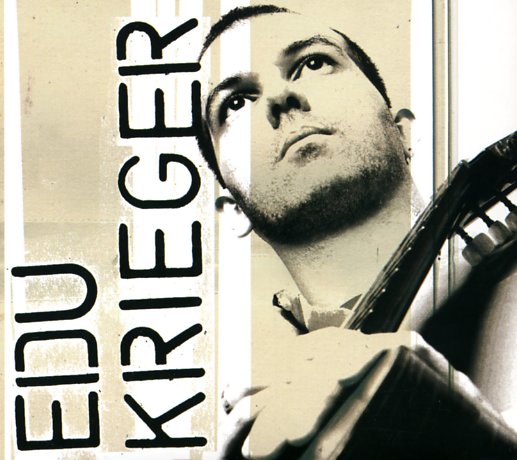 Edu Krieger's written a few songs for Maria Rita, but he's an even more compelling artist on his own – a musician who mixes samba roots with a bit more electric guitar – all in a blend that's quite organic and quite unique! There's a warm, personal sensibility to many of these tunes – but also not one that's too sleepy, or singer/songwriter also – almost that first blend of old and new that we loved hearing in initial music from Lenine or Otto a number of years back, but served up here with a stripped-down, personal sort of feel. Acoustic instrumentation mixes nicely with a few light beats and guitar – and Krieger's vocals have a poetic flow that's extremely compelling, even without a knowledge of the language. Titles include "Ciranda Do Mundo", "Novo Amor", "Desafio", "A Escada", "Temporais", "Saber Ganhar", and "Volta Pra Voce".  © 1996-2022, Dusty Groove, Inc.
(Out of print.)

Wanda Sa Ao Vivo (Brazilian pressing)
Biscoito Fino (Brazil), 2014. Used
CD...$4.99
Some of the coolest, most compelling work we've heard in years from Wanda Sa – a very spare, stripped-down session that really gets back to the roots of her music from the 60s! Wanda Sa has been reviving her bossa sound for the past decade or more, but most of those recordings often have a ... CD

Arquitetura Da Flor
Biscoito Fino (Brazil), 2006. Used
CD...$8.99
Francis Hime is one of those Brazilian musicians who just seems to get better and better with age – never resting on his laurels, and never watering down his craft – and instead just focusing on what he does best, and finding a way to do it even better! This album is a simple, subtle, ... CD

Jobim Sinfonico
Biscoito Fino (Brazil), 2002. Used 2 CDs
CD...$9.99
A beautiful set of symphonic tracks based around the work of Antonio Carlos Jobim – work that stretches back to the 50s, up through 60s bossa nova, and even includes some of Jobim's more complicated orchestrations from the 70s! The music is done in the arch-baroque style of other titles on ... CD

Bossa Eterna
Biscoito Fino (Brazil), 2008. Used
CD...$16.99
Beautiful bossa work from trombonist Raul DeSouza – a jazzy session that takes us back to his first 60s recordings as Raulzinho! The group's a quartet, with some especially nice work from Joao Donato on piano – a player who really helps shape the sound of the record here, as the album ... CD

Chico Pinheiro
Biscoito Fino (Brazil), 2005. Used
CD...$9.99
A warmly intimate set from Chico Pinheiro – a guitarist with a sweet jazzy style, and a singer with an approach that's personal and gentle, but never cloying. The backings really focus on Chico's light work on acoustic guitar – giving him enough space to gently state the themes of the ... CD

Minha Praia
Biscoito Fino (Brazil), 2004. Used
CD...$6.99
An album of incredible beauty – one that grabbed us a lot more strongly than we expected! Ze Renato's always had an incredible voice, but on this debut for the Biscoito Fino label, it seems to have hit a whole new level! The record has these magical arrangements that are incredibly inspired ... CD

O Doutor Do Baiao
Biscoito Fino (Brazil), Used
CD...$9.99
A loving tribute to the work of Humberto Teixeira – one of the most important Brazilian songwriters of his generation, as testified here by Caetano Veloso, Gilberto Gil, Maria Bethania, Lenine, Sivuca, and others! The set features spacious arrangements by Wagner Tiso – ones that push ... CD

Album Musical
Biscoito Fino (Brazil), 1995. Used
CD...$8.99
An incredible album dedicated to one of Brazil's greatest songwriters – recorded in instant-classic format with a host of guest stars that includes Milton Nascimento, Caetano Veloso, Chico Buarque, Djavan, Ivan Lins, Toquinho, Gilberto Gil, and many others! The tracks are all compositions by ... CD

Carioca
Biscoito Fino/Discmedi (Spain), 2006. Used
CD...$4.99
Tremendous work from an artist whose talents never dim over the years – and even then, a set that's quite possibly one of Chico's best in many many years! The record has a depth and complexity that's really wonderful – like the best of Caetano Veloso's more sophisticated work of the ... CD

Francis & Guinga
Biscoito Fino (Brazil), 2012. Used
CD...$9.99
A beautiful pairing of mature Brazilian talents – working here in a setting that makes both of them shine even brighter than usual! The set features just piano from Francis Hime and guitar from Guinga – and vocals from both – often trading back and forth alongside their ... CD