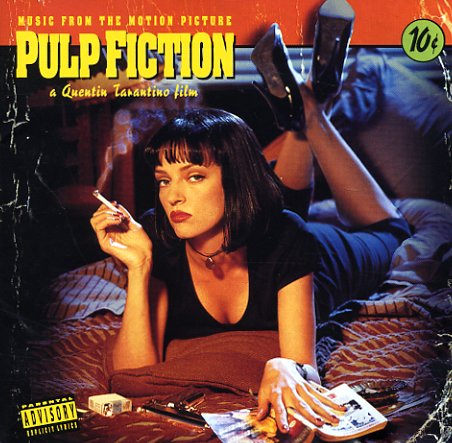 One of the best compilation soundtracks of the 90s – and a key early example of the genius of Quentin Tarantino when it came to using music in movies – especially given that the record was almost as big of a hit as the film! There's a wonderful mix of sounds here, plus a few key dialogue bits from the film – alongside cuts that include "Jungle Boogie" by Kool & The Gang, "Misirlou" by Dick Dale, "Let's Stay Together" by Al Green, "You Never Can Tell" by Chuck Berry, "Girl You'll Be A Woman Soon" by Urge Overkill, "Surf Rider" by The Lively Ones, "Flowers On The Wall" by The Statler Brothers, "Bullwinkle (part 2)" by The Centurions, "Son Of A Preacher Man" by Dusty Springfield, "Lonesome Town" by Ricky Nelson, and "Bustin Surfboards" by The Tornadoes.  © 1996-2022, Dusty Groove, Inc.