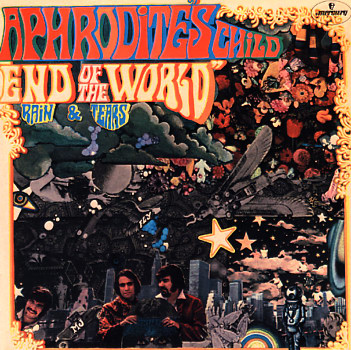 End Of The World

A brilliant criss-crossing of pop modes in late 60s Europe – and the first album from Greek rock supergroup Aphrodite's Child! Although later work by the trio was a fair bit more heady, the approach here is more focused psychedelic pop – done in styles that echo strongly with some of the late 60s styles coming out of the Parisian scene, which is where the group were working at the time. Lyrics, though, are sung mostly in English – which gives the record a bit of a Brit psychedelic feel – but there's some other elements here that are also strongly the group's own. A young Demi Roussos sings lead vocals and plays guitar, and new age maestro Vangelis plays organ and percussion with a sound that's quite different than any of his later work! Titles include "End Of The World", "Day Of The Fool", "Valley Of Sadness", "Rain & Tears", "Mister Thomas", "You Always Stand In My Way", and "The Shepherd & The Moon".  © 1996-2021, Dusty Groove, Inc.
(Part of the "Golden Era Of Rock – 1965 to 1975" series!)