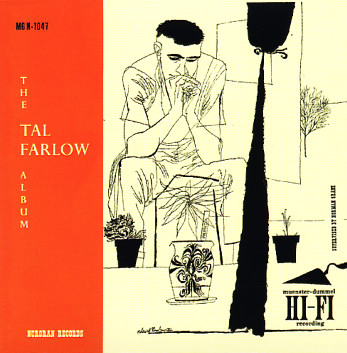 Tremendous guitar work from the great Tal Farlow – easily one of our favorite jazz guitarists ever, and a player with a wonderful sense of tone and timing! This early album has Tal declaring himself loudly and firmly – using a style that's got some slightly raspy edges, and which is a nice change from some of the too-clean modes of other 50s guitarists. The album features a core original 10" album session with a group that includes Oscar Pettiford on bass, Barry Galbraith on guitar, and Joe Morello on drums – plus 4 more tracks from a trio with Red Mitchell on bass and Claude Williamson on piano. Titles include "This Is Always", "Tea For Two", "Blues In The Closet", "Gibson Boy", "My Old Flame", "Is There Somebody Lovelier Than You", "Everything I've Got", "You And The Night and Music", "Love Nest", and "When The Wind And The Rain Are In Your Hair".  © 1996-2021, Dusty Groove, Inc.
(Ultimate HQ CD pressing – part of the "Tal Farlow 100th Anniversary Collection" series!)