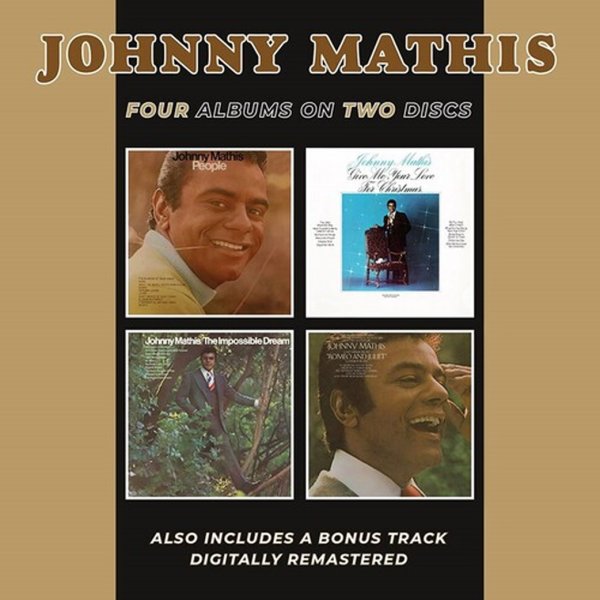 Four different albums from Johnny Mathis – all of which have a relatively unique pedigree! First up are the records People and The Impossible Dream – different 1969 albums from Johnny Mathis – both featuring material recorded earlier in the decade, during his time with Mercury Records! Evidently, Mathis got the rights to retain the masters, which he did – and allowed Columbia to issue some of the material on these two albums that offer a great look at the years before Johnny's mature return to the label in the late 60s. Many of the tunes here are mid 60s numbers, mixed with a few standards – and the backings have that quiet burning style that you'd recognize instantly from Mathis' earlier years, in ways that are a bit different than the modes he was then hitting in his new recordings. Strings often figure heavily, with Glenn Osser balancing things out nicely – and titles include "So Nice", "I Will Wait For You", "Laura", "Quiet Nights Of Quiet Stars", "More", "Sunny", "The Shadow Of Your Smile", "On A Clear Day", "The Very Thought Of You", "Eleanor Rigby", "Go Away Little Girl", and "Moment To Moment". Love Theme From Romeo & Juliet has Johnny Mathis taking on the title tune of the famous film, and also dipping into a mix of other soundtrack numbers from the time – plus a bit of pop material as well! As with other Mathis albums from this stretch, we really love the selection of tunes – penned by Michel Legrand, Francis Lai, Nilsson, and other songwriters we love so much from the generation – writers who really get Johnny past the familiar styles of his early hits. Ernie Freeman did some of the arrangements – which makes for a nice change – and titles include "Live For Life", "Without Her", "Windmills Of Your Mind", "Love Me Tonight", "Didn't We", "We", "The World I Threw Away", and "Aquarius/Let The Sun Shine In". Last up is Give Me Your Love For Christmas – a late 60s Christmas classic from Johnny Mathis – one that's in a nicely different mode from his earlier album of seasonal songs, and which really shows the way that the maturing Mathis was moving towards a different vibe as the 70s moved in! The tunes here are a good mix of more obscure numbers and well-chosen covers – all delivered with the kind of charm that makes Johnny such a great one to put on the turntable in the month of December – as you'll hear on cuts that include "Give Me Your Love For Christmas", "Do You Hear What I Hear", "Have Yourself A Merry Little Christmas", "My Favorite Things", "What Are You Doing New Year's Eve", "Calypso Noel", and "Christmas Day".  © 1996-2021, Dusty Groove, Inc.