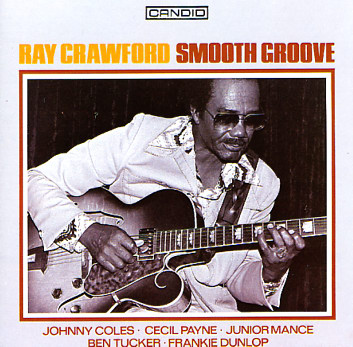 One of the only albums ever cut as a leader by soul jazz guitarist Ray Crawford – a contemporary of Grant Green and Wes Montgomery, but a player who's hardly ever gotten his due! This rare date was originally recorded for the short-lived Candid label back in 1961, but was only issued two decades later as part of the Candid revival – a fact that makes the album even more noteworthy! The set's got a really solid groove that reminds us a fair bit of Grant Green's best early 60s work for Blue Note – as Ray's playing in a tight, single-line format on most numbers – working with a very hip group that includes Johnny Coles on trumpet, Cecil Payne on baritone sax, Junior Mance on piano, Ben Tucker on bass, and Frankie Dunlop on drums. Tracks are all nice and long – very open, with plenty of solo space – and are all originals by Crawford as well. Titles include "Smooth Groove", "I Knew Prez", "Impossible", "Miss April", and "The Compendium Suite". Shoulda been a 60s classic – but at least we've finally gotten it released!  © 1996-2021, Dusty Groove, Inc.