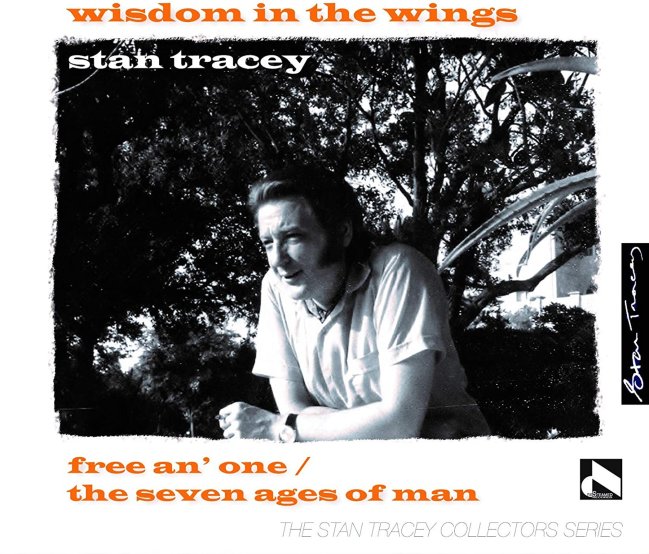 Wisdom In The Wings (Free An One/Seven Ages Of Man)

Two incredible albums from British pianist Stan Tracey – originally part of the Lansdowne series in the UK! Free An One has a cockney sort of title, but a very modern jazz vibe – one that shows just how much Stan Tracey had grown over the course of the 60s – as the vision here is a huge extension past the Monk/Herbie Nichols sound of his early days – with a strong ear for modal elements in the rhythms at times, mixed with surprisingly sensitive moments that balance things out tremendously! The "One" in the title is alto saxophonist Peter King, who's completely on fire on the record – playing with an edge that makes his performance here one of his greatest moments on record – alongside Stan on piano, Dave Green on bass, and Bryan Spring on drums. Titles include "Free An One", "Nudgy Vamp", "The Green Kingspring Of King Springreen", and "Rainbow At The Five Mile Road". Seven Ages Of Man is an incredible large group performance – led by pianist Stan Tracey, who is really coming into his own both as a composer and a larger jazz visionary – maybe even more important to the British modernist ideal of the late 60s as his earlier contributions were in the 50s! Stan's not just a hell of a pianist, but his overall sense of tone, timing, and color here is amazing – as he moves with a larger group that includes Mike Gibbs and Chris Pyne on trombones, Peter King on alto, Tony Coe on clarinet and tenor, Alan Skidmore on tenor, Ronnie Ross on baritone, Derek Watkins and Tony Fisher on trumpets, and Frank Ricotti on vibes – all tremendous players who effortlessly realize Tracey's ideas on the set. All titles are originals, and titles include "Matinee Days", "Overture & Beginners", "Kindly Leave The Stage", "Wisdom In Th Wings", and "Panto Panta".  © 1996-2021, Dusty Groove, Inc.

When There's Love Around
Stones Throw, 2021. New Copy
CD...$11.99 12.99 (LP...$25.99)
Kiefer's a musician who just keeps on getting better and better with each new record – a keyboardist who's moving more and more into jazz-based territory as time goes on – and past the more hip hop oriented material of his earlier work! There's still a love of shimmering production and ... CD

Season's Greetings – Here Comes Santa Claus – 29 Swinging Chestnuts
Bear Family (Germany), Late 40s/1950s/Early 60s. New Copy
CD...$9.99 11.99
Here Comes Santa Claus – and a heck of a lot of other folks too – all served up here in a mighty nice collection of Holiday goodies from the postwar years – classic singles and LP cuts, all served up in a mix of jazz, vocal, and R&B modes! The set's a great entry in the ... CD