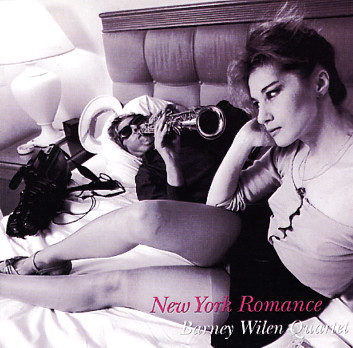 Beautiful blowing from the great Barney Wilen – an album that's as relaxed as you might guess from the image on the cover, but which has a rock-solid sound all the way through! At this point in his career, Barney's definitely back on top of his game – playing both tenor and soprano sax with a style that's relatively inside, but which always has a bit of an edge in the tone – echoing his years in music, both good and bad, and coming across with a depth that's undeniable. One of the real strengths of the record is also the rhythm section – Kenny Barron on piano, Ira Coleman on bass, and Lewis Nash on drums – all of whom swing things strongly on the upbeat tracks, and provide Barney with some wonderfully sensitive accompaniment on the ballads. Titles include "You'd Be So Nice To Come Home To", "Mack The Knife", "No Problem", "Blues Walk", and "Don't Fence Me In".  © 1996-2021, Dusty Groove, Inc.
(Part of the Venus Hyper Magnum Sound Masterpiece LP Collection!)