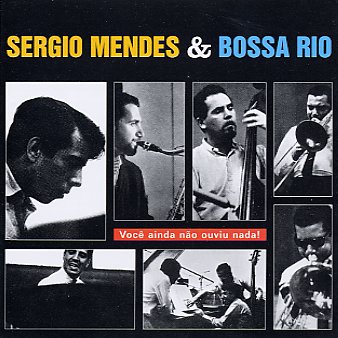 Early bossa jazz from Sergio Mendes – recorded with his famous Bossa Rio combo, in the years before he moved to America! The album's a classic in Brazilian jazz – a tight album of bossa-inflected jazz tunes played with razor-sharp precision, handled with a style that went on to influence countless other Brazilian groups at the time. Mendes is in the lead on piano, and other players include Edison Machado on drums, Raul De Souza on trombone, and Hector Costita on tenor sax. The whole thing's great – a masterpiece of both jazz and bossa – and it's filled with classic tunes arranged by Jobim, Moacir Santos, and Sergio himself. Titles include "Nana", "Primitivo", "Desafinado", "Ela E Carioca", "Amor Em Paz", "Noa Noa", and "Neurotico".  © 1996-2022, Dusty Groove, Inc.
(Out of print, 1991 Japanese pressing – still sealed with obi! Shrink has two stickers on the back.)

Dance Moderno (Japanese pressing)
Philips (Japan), 1959. Used
CD...$29.99
The fab first album by Sergio Mendes – very different than his later work! Sergio's more in a straight bossa mode here – playing with a tight little combo that features saxophone and trombone next to his own firey work on piano – tight and jazzy, and even with a few traces of US ... CD

Garota De Ipanema
Philips (Brazil), 1989. Used
CD...$12.99
A beautifully understated album from the legendary Nara Leao – done as a tribute to the bossa generation, with key help from the great Roberto Menescal – who handles the arrangements, plays guitar behind Nara's lovely vocals! Given that Nara's groundbreaking work of the late 60s was ... CD

Tropicalia 2 (US pressing)
Philips, 1993. Used
CD...$6.99
Well, it's not the 60s anymore – but this is still a wonderful album that reunites Caetano Veloso and Gilberto Gil in the spirit of their Tropicalia years – done in a style that shows that creative invention was still alive in MPB during the 90s! There's echoes here of modes to come by ... CD