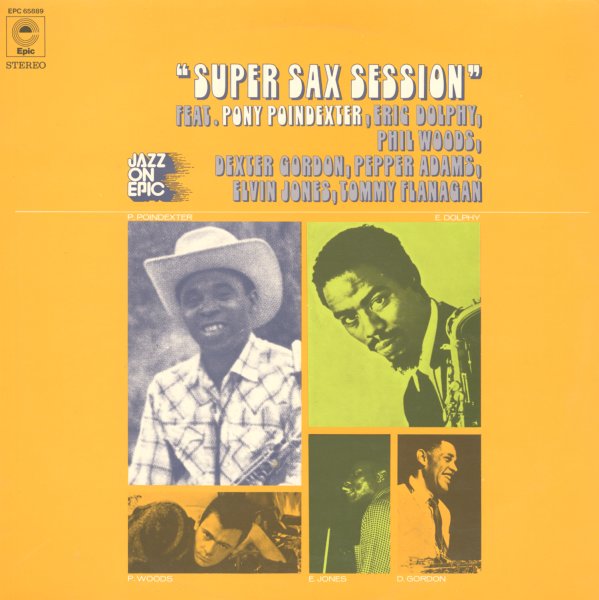 One of the few albums ever cut as a leader by the mighty Pony Poindexter – a great reedman who made great waves on both sides of the Atlantic in the 50s and 60s! Pony first rose to fame in the band of Count Basie, but he's also got a pedigree that includes work in both New Orleans and San Francisco, and key later sides in Europe for MPS and other labels. This rare Epic set has Pony working as the lead soloist in a screaming hard sax section that includes Eric Dolphy, Gene Quill, Clifford Jordan, Sonny Red, Phil Woods, and Dexter Gordon – all top-shelf players willing to take second seat to Pony, and let him stretch out in the lead! The group's a largish one, but Pony breaks out with some beautiful soulful solos on alto and soprano sax – supported by a tight rhythm section that includes Gildo Mahones on piano. Titles include "Lanyop", "Pony's Express", "Cattin Latin", "Blue", and "B Frequency".  © 1996-2021, Dusty Groove, Inc.
(Early 70s French pressing. Cover has some light splitting on the bottom seam.)

Captain Fingers (Original Master Recording)
Mobile Fidelity/Epic, 1977. Near Mint-
LP...$24.99
Smooth and funky fusion from Lee Ritenour – top-shelf all the way, and handled with a really soulful groove, thanks to production from the legendary Skip Drinkwater! Lee's all over the top of the guitar in true "Captain Fingers" style, and Skip makes sure he's got plenty going on ... LP, Vinyl record album

Bethlehem Years (aka Daddy Plays The Horn)
Bethlehem, 1955. Sealed
LP...$9.99
One of Dexter Gordon's proudest moments of the 50s – a rock-solid session for Bethlehem – easily one of the best-remembered hardbop sides from the label's California years! The album's got a relaxed, free-blown sound that's quite nice – with Dex in the lead on tenor, supported by ... LP, Vinyl record album