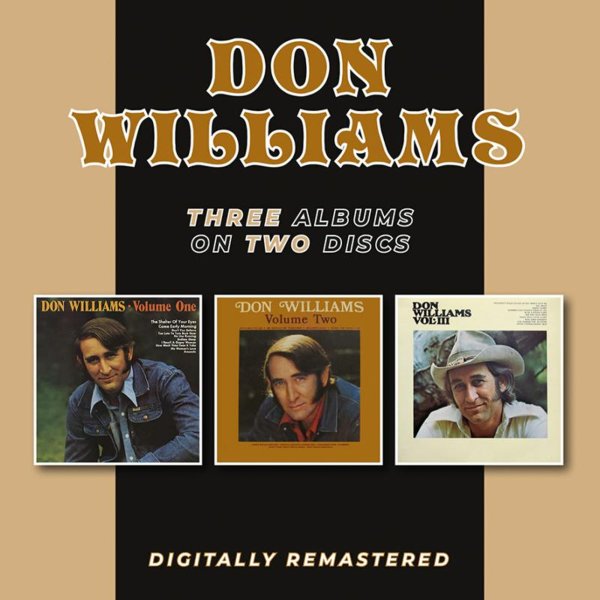 The first three albums from Don Williams – brought together here in a single set! First up is Don Williams Vol 1 – well-crafted work from Don Williams – an artist who began as a songwriter, but really hit his stride on this debut album! Williams has a gentle, easygoing vocal approach – one that might owe as much to the singer/songwriter generation at the tail end of the folk years – and which is a nice change from some of the more overblown style of the bigger acts of the time. The set was recorded by Jack Clement, but in a way that's different than some of his outlaw work to come – nicely laidback, on tunes that include originals by Williams and Bob McDill. Titles include "Come Early Morning", "Amanda", "My Woman's Love", "I Recall A Gypsy Woman", "Endless Sleep", and "Too Late To Turn Back Now". Don Williams Vol 2 is a set that has Don Williams finding a bit more of his own ground as a country singer – like the first, produced by Allen Reynolds in Jack Clement's studio – which gives the whole thing a very different vibe than mainstream Nashville work of the time! Williams is often introspective, and his voice really fits that mode – never in a way that's fake at all, and which makes for a very adult approach to country music – yet one that's also not got that world-weary, beaten-down quality of contemporaries. Songs include a number of Williams originals, and tunes by Bob McDill – titles that include "Wish I Was In Nashville", "Oh Misery", "Atta Way To Go", "Down The Road I Go", "I Don't Think About Her No More", and "Your Sweet Love". Don Williams Vol 3 is a real career-defining record for the singer – a set that furthers that warm, mature style that made Williams almost a Jim Reeves voice for the 70s – but set to themes that were more adult, and which really reflected the growing sophistication in country music songwriting. The instrumentation is expanded slightly from before – with some especially nice steel guitar and dobro from Lloyd Green – and titles include "Fly Away", "Ghost Story", "I've Turned You To Stone", "Such A Lovely Lady", "Lovin Understandin Man", "Goodbye Isn't Really Good At All", and "I Wouldn't Want To Live If You Didn't Love Me".  © 1996-2021, Dusty Groove, Inc.