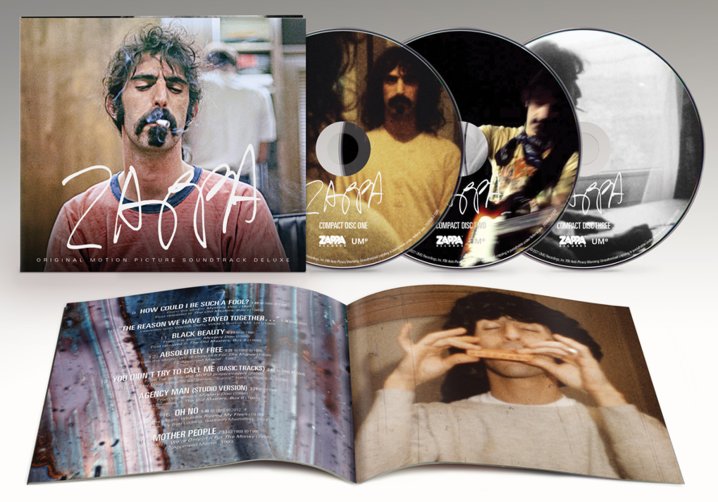 A huge package of Frank Zappa music, packed with classics, unreleased tracks, and selections from the score to the well-done documentary on Frank's life and music by Alex Winter! The first 2CDs feature all Zappa music – including some never-issued tracks pulled from Frank's vaults, mixed with other key cuts that really illustrate his genius – titles that include "The Black Page 1 (piano version)", "Call Any Vegetable (excerpts)", "Happy Together", "Scumbag", "You're Probably Wondering Why I'm Here", "Any Way The Wind Blows", "Motherly Love", "Mother People", "Firebird Suite Finale", "Road Ladies", "FZ On Varese", "Agency Man (studio version)", "G Spot Tornado", "Fembot In A Whet T-Shirt", "Mo's Vacation", and "Valley Girl" – plus related cuts "No Longer Umpire" by Alice Cooper, "The Captain's Fat Theresa Shoes" by The GTOs, and "Every Time I See You" by The Heartbreakers. CD3 features the whole new score for the film, including bits from the film – composed by John Frizzell with help from Nick Cimity and Davit Stal. Also includes more Zappa cuts that include "Watermelon In Easter Hay (live)", "Get Whitey", "Nap Time", "Overture", and "Envelopes (1983 original vinyl mix)".  © 1996-2021, Dusty Groove, Inc.