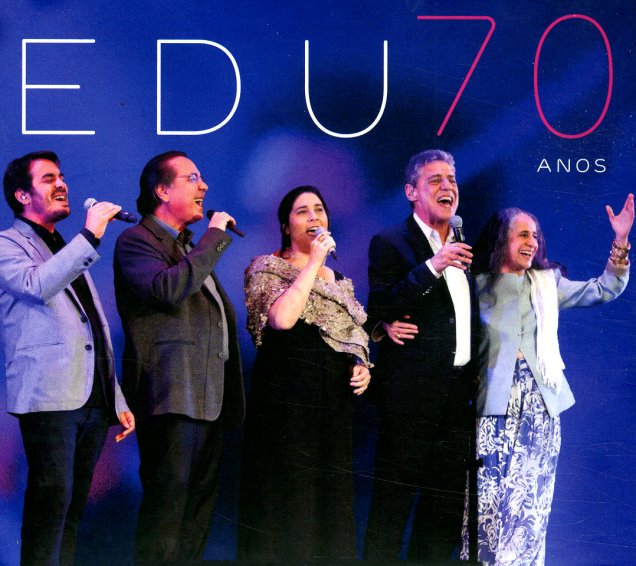 Edu Lobo at 70 – looking better than we did at 30 – working here in a wonderfully rich record that returns him to the glory of his most sophisticated sides from decades back! The performance is a live one – with a full orchestra behind the smaller combo – and Edu sings, and contributed all songs – and also gets wonderful help from guests who include Maria Bethania, Chico Buarque, Bena Lobo, and Monica Salmaso – all artists who duet with Lobo on a few tracks each, then all join together at the end! The approach is beautiful – more collaborative than most other albums from Edu, but in a way that still retains the magic and majesty of his music. Titles include "Noite De Verao", "Ponteio", "Cheganca", "Vento Bravo", "Ave Rara", "Corcacao Cigano", "Valsa Brasileira", and "Canto Triste".  © 1996-2021, Dusty Groove, Inc.
(Still sealed.)

Edu, Dori, & Marcos
Biscoito Fino (Brazil), 2019. Used
CD...$12.99
Three Brazilian music legends come together in a very unusual project – a record that features famous songs by all three artists, each performed by one of the other singers – in a setting that's got all the sophisticated warmth of the best projects on the Biscoito Fino label! There's ... CD

Miss Balanco
Biscoito Fino (Brazil), 2009. Used
CD...$9.99
Lovely work from Clara Moreno – a set that's much more laidback than some of her earlier dancefloor work, and one that's filled with bossa instrumentation throughout! Joyce co-produced the set, and you can really hear some of her acoustic soul in the music – a warm blend of snapping ... CD

Compositores
Biscoito Fino (Brazil), 2002. Used
CD...$12.99
A beautiful album from Miucha – the lovely bossa singer who recorded a few albums with Tom Jobim at the end of the 70s! The album's a much more mature effort than those records – with Miucha in the lead as a sophisticated, mature singer – working through a set of tracks that ... CD

Brazilian Duos
Biscoito Fino (Brazil), 2003. Used
CD...$4.99
A lovely set of mellow tracks – featuring the vocals of Luciana Souza and subtle instrumental backing by Romero Lubambo, Marco Pereira, and Walter Santos. The format is simple and clear – and the set has all the gentle warmth of the best titles on the Biscoito Fino label – with ... CD

Caravanas – Ao Vivo
Biscoito Fino (Brazil), 2018. Used 2CDs
CD...$9.99
A fantastic live follow-up to the Caravanas album by Chico Buarque – and done at a similar level that shows that Chico's lost none of his charms as the years go by! The set's got the man upfront, singing and playing acoustic guitar – with a combo behind him, kicking up the rhythms in a ... CD