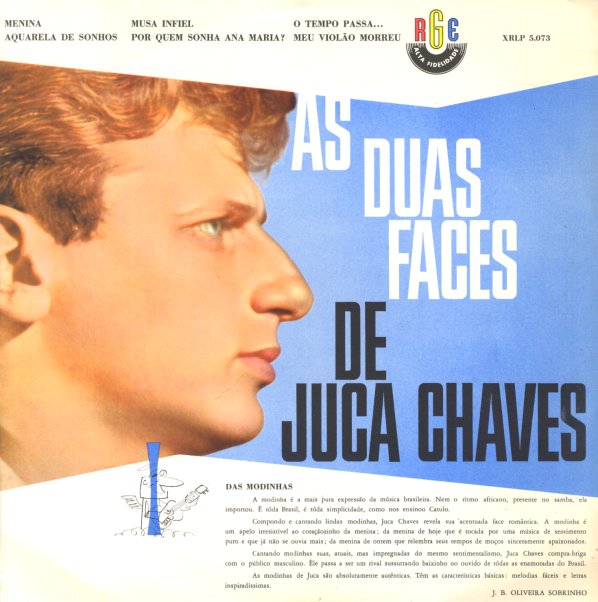 The two faces of Juca Chaves – one a witty samba singer, the other a straighter vocalist – served up here in a strong split album from the 60s! Side one features "satiras" – tunes that often have Juca's vocals cutting sharply alongside percussion, guitar, and some nice light woodwinds – with a lively sound throughout. Side two features "modinhas" – mellower, darker songs that often mix some melancholy strings with guitar, conducted by Simonetti. Titles include "Presidente Bossa Nova", "To Duro", "Nos, Os Gatos", "Nasal Sensual", "Menina", "Musa Infiel", and "O Tempo Passa".  © 1996-2021, Dusty Groove, Inc.

A Arte Do Espectaculo
RGE (Brazil), 1986. Used
CD...$9.99
Live set from the 80's by this Brazilian pianist and singer. The music's pretty laid-back jazz, with a mix of a few American standards like "Perdido" and "Night & Day", and a lot more Brazilian compositions like "Alguem Como Tu", "Solidao", "Uma ... CD

Eu Miltinho
RGE/Som Livre (Brazil), Early 60s. Used
CD...$16.99
A classic set of samba from Miltinho – done in a mix of lively styles and more romantic modes! Some tracks here are quite driving and upbeat, while others have a sadder, more emotive feel – a bit like Brazilian pop of the late 50s, but perhaps somewhat leaner overall – and in a ... CD

Boca Da Noite
RGE/Som Livre (Brazil), 1974. Used
CD...$11.99
A fantastic album from Toquinho – one of the best that he cut during the 70s! This album's got a much more stripped-down sound than others – with a soulful mix of vocals and spare acoustic guitar that sounds somewhere between the early 70s work of Baden Powell and Terry Callier – ... CD

Brasa 4
Bemol/Discobertas (Brazil), 1968. Used
CD...$11.99
A cool collection of late 60s rock and pop from Brazil – and a set that stands as a nice contrast to some of the "song festival" albums from the time on Philips and Odeon! Like those sets, this one presents up-and-coming artists working through a variety of material – but ... CD