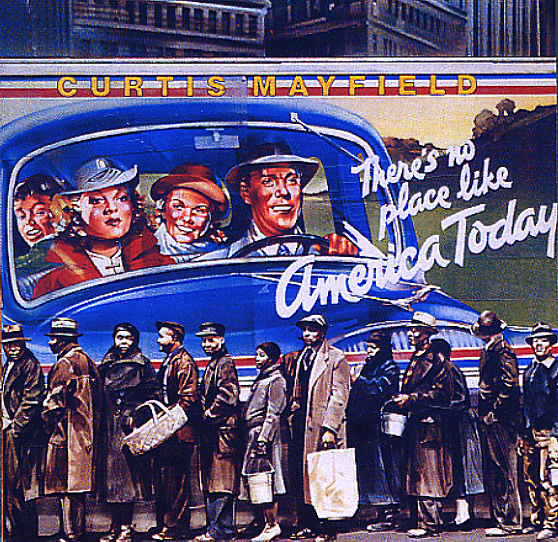 A great album by Curtis Mayfield – filled with some excellent lesser-known gems! There's No Place Like America was Curtis' scathing testament to the State Of The Union – and it's got a hip political tone that's right up there with the best of his early 70s songwriting – perhaps even more so, as the message is a bit subtler than on other albums, and laid out in this stoner mellow funk vein that's very tasty throughout, and which makes for an extremely unified album! The album includes a version of the cut "Hard Times", which was done earlier by Baby Huey, plus "Blue Monday People", "Love To The People", and "When Seasons Change". Also includes the great sweet love song, "So In Love"!  © 1996-2023, Dusty Groove, Inc.

Superfly (2LP deluxe edition)
Curtom/Run Out Groove, 1972. New Copy 2LP Gatefold
LP...$38.99 39.99 (CD...$9.99)
Curtis Mayfield's lasting classic – and an album that the world will remember forever! Apart from being his hugely successful entry into the blacksploitation soundtrack field, this album's also a monster set of grooves that includes some of Curtis' funkiest work ever – a record that ... LP, Vinyl record album

Amazing Grace (white vinyl pressing)
Atlantic/Rhino, 1972. New Copy 2LP Gatefold (reissue)
LP...$33.99 34.99 (LP...$29.99)
A legendary album – one that has Aretha Franklin returning to her roots in gospel music – but working with all the strength and power that Atlantic Records had to offer! From early years recording as a young voice alongside her father's congregation, Aretha has matured into a hell of a ... LP, Vinyl record album