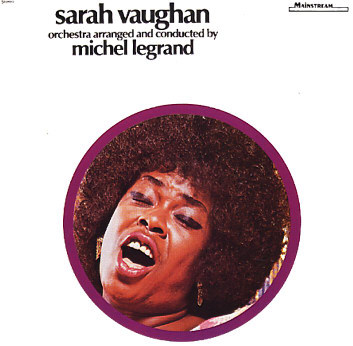 A beautiful collaboration between Sarah Vaughan and Michel Legrand – and easily one of Sarah's greatest albums of the 70s! As he was doing with other singers at the time, Legrand helps Vaughan hit a new level of sophistication here – bringing in tunes that really get past simple pop and older standards, with adult themes supported by equally mature backings – filled with rich colors and complicated tones developed over Legrand's great work on film scores. Almost all tunes are originals by Michel – many pulled from his film work – and he also scored the arrangements here, working with the orchestra in a swirling blend of strings and jazz. Titles include "I Will Say Goodbye", "Summer Me Winter Me", "His Eyes Her Eyes", "Wave", "Blue Green Grey & Gone", "Pieces Of Dreams", "Hands Of Time", "The Summer Knows", and "Once You've Been In Love".  © 1996-2021, Dusty Groove, Inc.
(Part of the "Solid Records – Jazz Giants" series!)