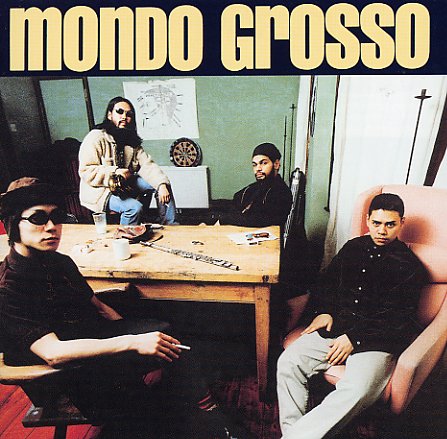 One of the strongest releases by this Japanese acid jazz combo, but unfortunately, also one of their shortest! The album's got 3 very different mixes of their cool track "Invisible Man", all with a sound that's varied from the others. Plus, there's two great Braziliany tracks – "Tree, Air, & Rain On the Earth" and "Espirito, Allegria, Emosau" – which highlight their great talent for cool jazzy arrangements. The last cut is a Masters At Work mix of the cut "Vibe PM", which is a nice dancefloor groover. Nice stuff if you like bands like Spiritual Vibes or Kyoto Jazz Massive!  © 1996-2021, Dusty Groove, Inc.
(Out of print. Booklet has a very small tear from one of the plastic tabs.)

MG4R – Remix
Sony (Japan), 2001. Used
CD...$6.99
One of the best albums of 2000 gets remixed! Mondo Grosso's MG4 is one of our favorite new albums of recent years – a fantastic blend of soul, jazz, Brazilian rhythms, and two-step production – and this new album takes all the best elements, and makes them even better. The list of ... CD

BLZ (voc, inst)
Sony (Japan), 2002. Used
CD...$1.99
A groove happy single from Mondo Grosso! The track's one of their catchiest in years – a kicking two-step beat, strong use of acoustic guitar over the beats, and sweet English language vocals by Blu James. The track's an anthemic groover of the sort that's best heard blasting out of a car ... CD