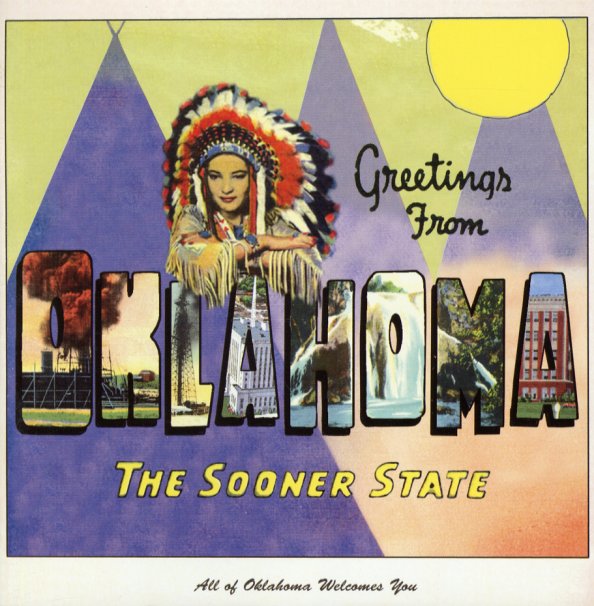 Greetings From Oklahoma – The Sooner State

Here's a state-based legacy we never really knew about – save maybe for the odd Bob Wills' song or two – a huge batch of postwar material laid out in tribute to the Sooner State – the nearby cousin of Texas that often gets short shrift in American pop culture! Turns out, there's plenty to say about Oklahoma in song – as this set's 25 tracks will attest – a nice batch of material that starts in the late 40s, runs through classic country, and even includes a few later surprises too. Titles include "Oklahoma's OK" by Bobby Barnett, "Oklahoma Hills" by Hank Thompson, "Oklahoma City" by Luke Wills, "All Aboard For Oklahoma" by Spade Cooley, "Okie Boogie" by Ella Mae Morse, "Oklahoma Waltz" by Johnny Bond, "Henryetta Oklahoma" by Marvin Rainwater, "Ramblin Okie" by Terry Fell, "She's An Okie" by Al Vaughn, and the classics "Okie From Muskogee" by Merle Haggard and "Take Me Back To Tulsa" by Bob Willis.  © 1996-2021, Dusty Groove, Inc.

Auctioneer
Dot/Bear Family (Germany), Late 50s. New Copy
CD...$13.99 19.99
A nice collection of work from Leroy Van Dyke – a singer who may not have been the purest country talent of his time, but who did a really great job bridging both the worlds of hillbilly and postwar pop! Leroy's got a great voice – warm and fluid, but never too mellow – and on ... CD