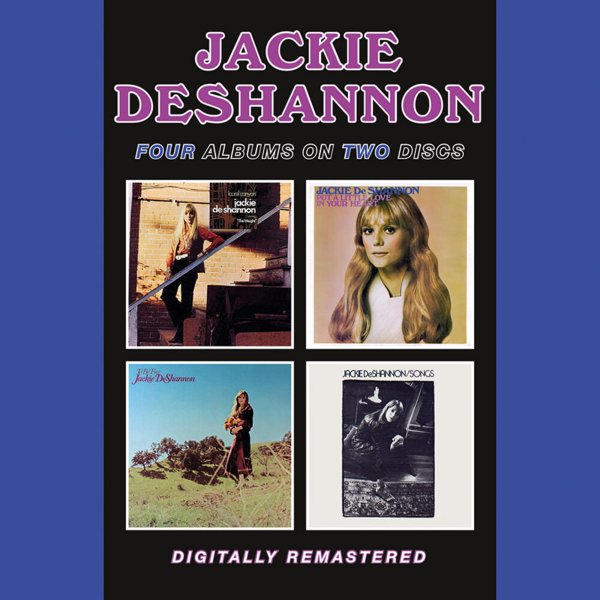 Four classic albums from Jackie DeShannon – all in a single set! First up is Me About You – sophisticated Jackie at her best – working with great arrangements from Jack Nitzsche and Nick DeCaro – both cats from the California scene we can really trust for "cut-above" pop work like this – music that goes way past the simple sounds of DeShannon's start – into cool adult territory that really makes the album great. Jackie's vocals are surprisingly soulful in the setting – even more so than before – and the tunes include lots of gems, including versions of Van Dyke Parks' "High Coin", John Sebastian's "Didn't Want To Have To Do It", and Tim Hardin's "Baby Close Its Eyes". Also includes "I Keep Wanting You", "Me About You", and "Nicole". Next is Laurel Canyon – heady work from Jackie DeShannon's later years in 60s pop – an album with themes and styles that go way beyond her earlier recordings – as you might guess from the hip Laurel Canyon reference in the title! Jackie's working here in a mode that's much more strongly in a singer-songwriter style than before – with arrangements and backings that are a lot more organic, and less pop-tuned than ever – almost in a Laura Nyro approach on some numbers. As usual, a good portion of the tracks were written by Jackie herself – including "Holly Would", "Come & Stay With Me", "LA", "Too Close", and "Laurel Canyon" – and the album also features a few well chosen tracks by other writers too, like "Bitter Honey" by Paul Williams & Roger Nichols, "I Got My Reason" by Barry White, and "You've Really Got A Hold On Me" by Smokey Robinson. Put A Little Love In Your Heart is quite possibly the last great hit from singer Jackie DeShannon – an album built around the righteous spirit of the title track – filled with really wonderful original tunes penned by Jackie and soul singer Jimmy Holiday! The album may well be the best to explore the space between pop and soul that often characterized Jackie's work – and the overall sound is somewhat similar to some of Dusty Springfield's best pop/soul work from the same stretch. 10 of the album's 12 tracks are originals by Holiday and DeShannon – all set to soaring orchestrations by James Langeford, which often have a pronounced influence from the sound of Atlantic Records in the late 60s! Titles include "Put A Little Love In Your Heart", "You Are The Real Thing", "River Of Love", "Movin", "You Can Come To Me", "You Have A Way With Me", and "I Let Go Completely". To Be Free is an interesting little record – with kind of a crossover California soul feel overall – recorded with Rene Hall arrangements that echo a few rootsy modes at times, mixed in with fuller orchestrations that step a bit back towards Jackie's earlier years on Imperial – a surprisingly nice blend, with a fresh sound for the 70s. The album features a number of great tracks co-written with Jimmy Holiday – a fellow Imperial talent – and titles include "Mediterranean Sky", "Sooner Or Later", "What Was Your Day Like", "Livin On The Easy Side", "Brighton Hill", and "When Morning Comes Again".  © 1996-2022, Dusty Groove, Inc.