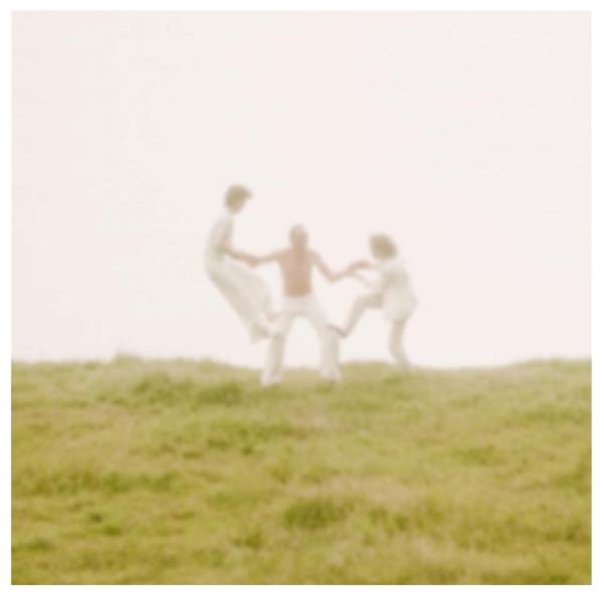 A stunning set – one that brings together two rare albums from this legendary group – plus essential rare material too! First up is Musik Von Harmonia – an electronic prog classic – served up by the trio of Dieter Moebius and Hans-Joachim Roedelius from Cluster, plus Michael Rother of Neu! The tracks here have a definite Cluster-like sound – instrumentals that use organ, keyboards, guitar, and electronic percussion to build up some wonderfully analogue-styled grooves – often quite slow at first, but filling up nicely as added elements come into the mix! The record's easily one of our favorites from the time, and has a much darker sound than later Moebius/Roedelius work. Titles include "Watussi", "Ohrwurm", "Ahoi", "Dino", "Sonneschein", "Sehr Kosmisch", "Veterano" and "Hausmusik". Next is Deluxe – a brilliant little album from Harmonia – quite possibly their greatest record ever, and a set that's wonderfully balanced between progressive and electronic modes! There's a live drummer on the set – Mani Neumeier of Guru Guru – and although he still plays with a spare, circular mode that recalls the Harmonia rhythms of before, there's also a slight bit of propulsion here too – one that pushes the keyboards and guitars alongside nicely. There's also some spacey vocals at times, which when coupled with these other elements, gives the record a sound that's a bit like early Neu – although still a bit more electronic overall. A great bridge between two worlds of music in the German scene of the 70s – with tracks that include "Gollum", "Monza", "Notre Dame", "Deluxe", "Walky Talky", and "Kekse". Next is Live 1974 – a hypnotic live set from Harmonia – and a pretty incredible sonic document of the hugely important group made of Krautrock lynchpins Michael Rother, Hans-Joachim Roedelius and Dieter Mobius! The gig was one from March of 1974 in Griessem, Germany and it finds the trio kicking out the trance inducing ambience, lumbering 70s style electronic manipulation, and improvisational interplay without ever sacrificing a heady groove! The group was hardly content to simply play the tracks from their couple of LPs – taking a much more freeform, exploratory and beautifully languorous approach to their sound – a pretty raw, but no less beautiful swirl of electronic percussion, keys, synthesizer and ambient guitar. Titles include "Shaumberg", "Veteranissimo", "Arabesque", "Holta-Polta" and "Ueber Ottenstein". Tracks & Traces is textural mood pieces and quite beautiful material from Harmonia and Eno – beautiful mid 70s recordings and a few unreleased gems – wholly wonderful material that weirdly didn't see a release for about 30 years! Some of the tunes are sparely furnished, kind of pastoral bits of echoing atmospherics and trance inducing sound loops, others with more jarring bits of dissonant tension, and all of it holding up proudly with the better known work of the sound masters involved, together and separately! Includes "Welcome", "Atmosphere", "Camos Comapneros", "By The Riverside", "Weird Dream", "Almost", "When Shade Was Born". "Aubade" and more. Last up is Documents 1975 – four unreleased tracks all recorded during the pivotal year of 1975, when the group was really pushing its sound a bit, and helping find a new path forward for the energy of Krautrock! As with other Harmonia work, there's a sense of layering and modal progression that drives most of these numbers forward – but there's also a bit of compactness, too – which has some of the most important musical elements playing a stronger role more quickly – showing both the direction that group members Dieter Moebius and Hans Joachim Roedelius would take in later work, and the influence that Harmonia would have on other European acts through the post-punk years. Mani Neumeir of Guru Guru joins in on drums on two tracks – and along with Michael Rother, the varied instrumentation from Moebius and Roedelius includes lots of keyboards, electronics, guitar, Fender Rhodes, and even a nagoja harp! Titles include "Tki Taka At Harmonia Studio In Forst", "Proto Deluxe At Harmonia Studio In Forst", "Live At Fabrik In Hamburg", and "Live At Onkel Po In Hamburg".  © 1996-2021, Dusty Groove, Inc.