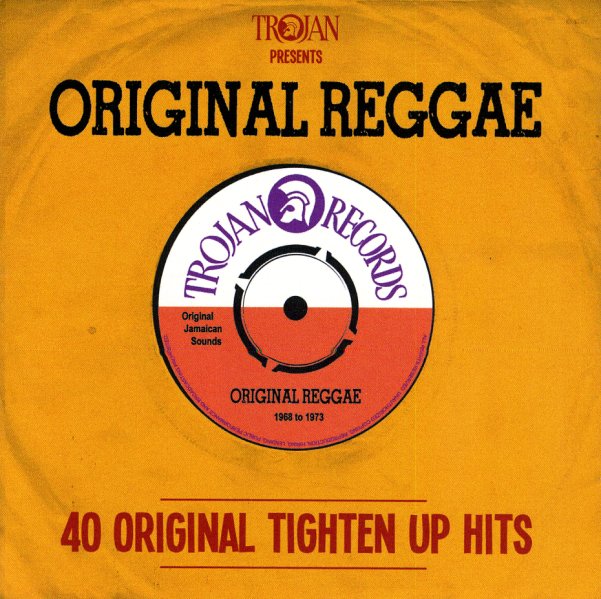 Seminal sounds from a time when Trojan Records was really doing amazing work – finding tunes on the Jamaican side of the Atlantic, but also breaking them big in the UK too – forging a crucial musical bridge that would go onto impact scenes and styles for decades! This collection brings together 40 massive numbers from Trojan's key years of helping grow the sound of early reggae – not the bigger hits of the Island Records scene, or some of the major labels – but great indie tracks that are still some of our go-to cuts for the genre. Titles include "Do The Reggay" by The Maytals, "Herbsman" by King Stitt & Andy Capp, "Blood & Fire" by Niney, "A Little Love" by Jimmy London, "Shaft" by The Chosen Few, "Maga Dog" by Peter Tosh, "Westbound Train" by Dennis Brown, "Freedom Street" by Ken Boothe, "Sweet Sensation" by The Melodians, "Clint Eastwood" by The Upsetters, and "Fatty Fatty" by Clancy Eccles.  © 1996-2021, Dusty Groove, Inc.

Trojan Presents Mento & R&B – 40 Roots Of Reggae Classics
Trojan (UK), Late 50s/Early 60s. Used 2CDs
CD...$9.99
The roots of reggae, ska, and rocksteady – presented here in a wonderfully overstuffed collection! The work here is a great blend of styles – beginning with mento, the Jamaican equivalent of calypso – and running through more soul-styled work that came from the Kingston scene ... CD

Trojan UK Hits Box Set (3CD set)
Trojan, Late 60s/1970s. Used 3 CDs
CD...$9.99
There's no doubting the impact that the scene made in Great Britain and how that helped break those sounds worldwide. This nicely priced box set collects 50 of the biggest Jamaican hits in the UK from the vaults at Trojan, covering mostly their great ska and rocksteady. Includes the Skatalites ... CD

Trojan Roots (3CD set)
Trojan (UK), Late 60s/Early 70s. Used 3 CDs
CD...$22.99
Righteous & crucial! We can't think of a better collection of roots rock in one place, and certainly not for near this great price. This excellent budget collection brings together 50 mighty tracks of sufferer's songs, including "Cool Rasta" by the Heptones, "Africa Is The ... CD

Trojan Soulful Reggae Box Set (3 CD set)
Trojan (UK), Late 60s/1970s. Used 3 CDs
CD...$19.99
Soulful reggae is right, and there's no shortage of it here – 50 tracks worth! Loads of covers of soul & R&B hits as well as a number of great Jamaican originals, some of them funky, some of them smooth, soulful ballads. Too many great tracks to list here, but we know you're ... CD

Beat Down Babylon – The Upsetter Years
Trojan (UK), 1970s. Used
CD...$11.99
Like so many vocalists, Junior Byles shone brightest under the guidance of Lee Perry, and this excellent retrospective collects more than just a few of the great Jamaican soul sides he'd cut under his production. All of these numbers have the spare loping groove, with nice organ lines and bouncing ... CD

Legend – The Best Of Bob Marley & The Wailers
Island, 1970s. Used
CD...$3.99 (CD...$8.99)
While we're not big on career retrospective best of's, especially artists like Marley, whose been collected over & over, this is actually a respectable set, and the vinyl's pretty darn hard to get ahold of anymore. Includes tons of classics, like "Get Up Stand Up", "Exodus", ... CD