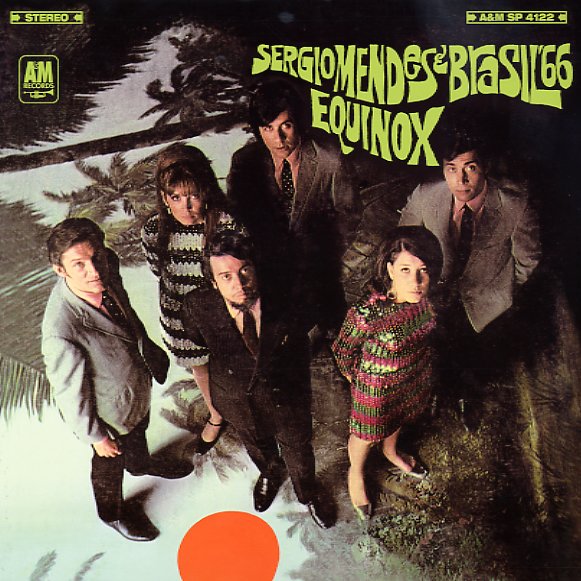 The second album by Sergio and crew – and a real push forward for the group! The basic format of two-female harmony leads is still in place – but for some reason, this album gives a bit more of a nod to Brazilian roots than before, and really spices things up with an even more interesting array of songs! There's a bit less of the pop/cover style than before, and a bit more of a nod towards the hipper side of Brazilian music – especially the modernists of the bossa nova generation. Brazilian tunes include versions of "Constant Rain", "Cinnamon & Clove", "Bim Bom", and "Wave" – and there's also a few nice English numbers, like their hit version of "Night & Day", and a great reading of "Watch What Happens"!  © 1996-2021, Dusty Groove, Inc.
(Tan label stereo pressing. Vinyl has a light click on "For Me" and "Bim-Bom".)

Fool On The Hill
A&M, 1968. Very Good+ Gatefold
LP...$11.99
One of our favorite albums by Sergio Mendes & Brasil 66 – a perfect bridge between the simple pop of earlier records, and the group's expanding sound as the 70s approached! The warmly glowing Brasil 66 style is still very strongly in place, but the music here is all a bit hipper – ... LP, Vinyl record album

Miltons
Columbia, 1988. Near Mint-
LP...$11.99
This one's from the late 80s, and although some of the production work doesn't hold up entirely, Milton's voice is more beautiful than ever, and there's some amazing songwriting on here that holds up fantastically no matter how it's treated. Titles include "River Phoenix (Letter To A Young ... LP, Vinyl record album

Serie Autiografos De Sucesso Vol 2
Fontana (Brazil), 1960s. Very Good+
LP...$24.99
A hip collection of some of Baden's best work from the 60s – including some of his classic sides for the Forma and Elenco labels. Titles include "Tempo Feliz" and "Deixa", both performed with Mauricio Einhorn; "Coisa No 1" and "Deve Ser Amor", ... LP, Vinyl record album