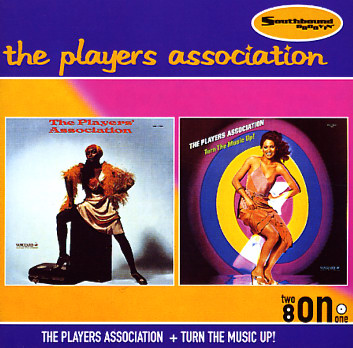 Players Association/Turn The Music Up!

A pair of gems from The Players Association – back to back on a single CD! First up is the fantastic first album from The Players Association – a group who may well have gotten their name for the great jazzy musicians in their lineup! Players Association are best known for their disco grooves, but they've got a core sense of instrumentation that's really a cut above – with strong leadership from jazzman Chris Hills – who plays drums, guitar, and keyboards – and other players who include Joe Farrell on tenor and flute, Bob Mover on alto and soprano, Jon Faddis on trumpet, and Mike Mandell on keyboards! Ray Mantilla and Buddy Williams add in some great percussion to the mix – which furthers the spontaneous, jazzy vibe of some of the tunes – and titles includes the funky cut "I Like It", which has a nice break in the beginning, plus the tracks "Let's Groove", "Hustlin", "Moon In Pisces", and a sweet cover of "For The Love Of You". Turn The Music Up is wonderful work from The Players Association – a group who were equal parts jazz funk and equal parts 70s club – with a vibe that's maybe like The Blackbyrds or other Fantasy Records acts at their best! The mighty Chris Hills is at the helm – and the record is overflowing with top-shelf talent from the jazz side of the spectrum – work by Bob Berg on tenor, Tom Harrell on trumpet, and Bob Mover on alto – all with room to solo, and really helping bring a musical maturity to the record that other disco records never seem to have! Titles include "Everybody Dance", "Ride The Groove", "The Closer I Get To You", and "I Wish".  © 1996-2023, Dusty Groove, Inc.