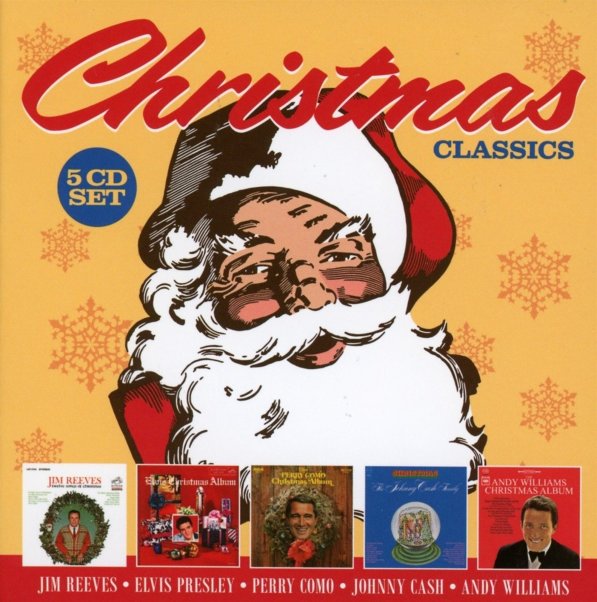 A host of classic Christmas albums – all packaged together here in mini LP-styled sleeves! First up is Twelve Songs Of Christmas – a set that has the warm voice of Jim Reeves making these holiday tunes sound mighty nice – especially considering that the arrangements here are by Bill Justis and Chet Atkins! Jim may not be our favorite country artist on other material, but he does a great job of sending these tunes home for the holidays with his paternalistic approach and a genuine warmth. Titles include "Jingle Bells", "An Old Christmas Card", "Senor Santa Claus", "Blue Christmas", "Mary's Little Boy Child", "Silent Night", and "Oh Come All Ye Faithful". Next is the 1957 Elvis' Christmas Album – a set that had RCA Records wisely rushing the young singer into the studio to cut a host of Christmas tunes – which ensured that Elvis would be spinning on the turntable for many seasons to come! Titles include "Here Comes Santa Claus", "Silent Night", "Blue Christmas", "White Christmas", and "Santa Bring My Baby Back". The Perry Como Christmas album is a late 60s classic – and we can't think of anyone we'd rather have sitting round the Christmas tree than ol' Perry Como! The guy's more relaxed, laidback, trusting, and honest than any of our old relatives combined – and all of his old barber charm comes through perfectly on this late 60s set of Christmas tunes arranged and conducted by Nick Perito. Perry's got the Ray Charles Singers behind him on backing vocals, and titles include "Silver Bells", "Toyland", "Have Yourself A Merry Little Christmas", "Christmas Eve", "There Is No Christmas Like A Home Christmas", and "Do You Hear What I Hear". The Johnny Cash Family Christmas album features work from Johnny, plus friends and relatives – a lineup that includes June Carter, Tommy Cash, Carl Perkins, and Larry Butler! The format's nice, too, with a bit of dialogue between some of the tracks – amidst tunes that include "King Of Love", "Jingle Bells", "Christmas Time's A Comin", "Christmas With You", "Christmas As I Knew It", "Merry Christmas Mary", "An Old Fashioned Christmas", and "When You're Twenty One". The Andy Williams Christmas Album features Christmas goodness from the man who really knew how to warm up the TV set during the Holiday season – a singer who virtually owned the TV airwaves at the time this record was cut, taking the masculine mantle from Perry Como – and delivering a similar sense of comfort and calm during the month of December! Titles include "Happy Holiday/The Holiday Season", "The Christmas Song", "A Song & A Christmas Tree", "Kay Thompson's Jingle Bells", "O Holy Night", "The First Noel" – and Andy's long-running Christmas classic, "It's The Most Wonderful Time Of The Year".  © 1996-2020, Dusty Groove, Inc.

Classic Christmas Album (Holiday plus bonus tracks)
Sony, 2015. New Copy
CD...$8.99
Earth Wind & Fire are plenty darn spiritual most of the rest of the year, but here they bring a special sort of spirit to a great set of seasonal tunes – one that's maybe one of the best soul Christmas albums we've heard in a long time! The group have lost none of their groove over the ... CD

Home For Christmas
Sony, 1995. New Copy
CD...$4.99 6.98
Christmas classics from Luther Vandross – a later album in his career, but one that's still pretty darn tremendous – and a heck of a lot more soulful than other holiday offerings from the 90s! The production's a bit modern, but that amazing Vandross voice really dominates – ... CD

Wonderful Christmas Time
Motown, 1994. New Copy
CD...$13.99 14.99
Pretty great Christmas sounds from Diana Ross – very different than her famous Motown Holiday work with The Supremes – and instead a record that balances her nicely between jazz styles and more sophisticated vocal sounds! There's relatively full arrangements on most tracks – and ... CD