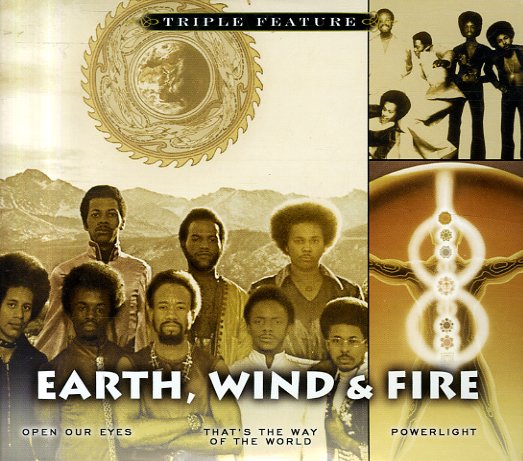 A trio of great albums from Earth Wind & Fire – packaged together here in a single set! First up is Open Our Eyes – a set that's spiritual, soulful, and oh, so beautiful! This record captures Earth Wind & Fire at a perfect transition moment – when they've still got some of their avant jazz roots, but are leaning towards the smooth soulful funk sound that put them on the charts a few years later. The whole thing's a wonderful mix of spiritualism and funky jazz – and it includes their massive cover of "Mighty Mighty", plus a lot of tracks with cool instrumentation, like "Kalimba Story", "Drum Song", and "Caribou". Great jazzy groovers, all of them! Next is That's The Way Of The World – Earth Wind & Fire's ultimate moment of the 70s – and a perfect blending of all their influences that stands as a lasting tribute to their super-huge effect on soul music! The record features all aspects of the band coming into perfect cohesion – bassy funk, mellow soul, and Afrocentric jazz – all expertly handled by the great Charles Stepney, who still has the same rich talent for blending styles that he had while working at Chess/Cadet during the glory days of the late 60s. Some of these songs have been played to death (and covered so much) over the years that it's often easy to forget what a crowning moment this was for former underground soul heroes Earth, Wind & Fire – but we'll never cease to be amazed at the power of their mid-70s work, and this album's the best of the best. Titles include "Shining Star", "That's The Way Of The World", "Reasons", "Africano", "See The Light", and "Happy Feelin". The last album is from the early 80s, but the Powerlight is burning bright – Maurice White, Philip Bailey, and the rest of the group still very much in classic formation! Even on a post-70s set like this, Earth Wind & Fire still manage to come up with tracks that beat the rest of the ensemble funk groups that grew up in their wake – groovers that still set a new level for the boogie generation, and mellow tracks that cross over beautifully without ever getting to soppy or adult contemporary. The balance is a tricky one, but the group always manage to pull it off – and guide the whole presentation of work here with enough class and care to show that the whole thing's the result of genius planning, and not just some happy accident! Titles include "Something Special", "Miracles", "Fall In Love With Me", "Straight From The Heart", and "Spread Your Love".  © 1996-2021, Dusty Groove, Inc.