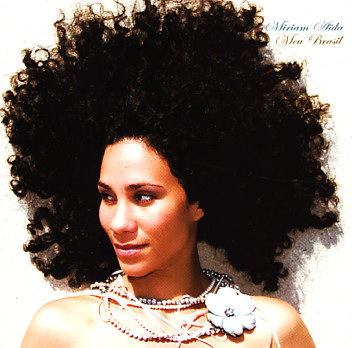 A beautiful album of straight Brazilian samba from singer Miriam Aida – normally known as the vocalist in electronic group A Bossa Eletrico, but stepping out here in a much more acoustically-styled set! Miriam's got a really lovely voice that sounds even better in a lighter setting like this than it does on the Bossa Eletrico work – and tunes are a mix of older Brazilian numbers from the 60s and 70s – compositions by Jobim, Baden Powell, Jorge Ben, and others. Instrumentation includes lots of guitar, cavaquinho, and bandolim – plus a bit of well-used sax and flute from Fredrik Kronkvist, another player with experience in electronica, but roots in more traditional modes. Titles include "Reza", "Por Causa De Voce Meninha", "Umas Flores", "Deixa", "Ensam Kvar", "Folhas Secas", and "Estrada Do Sol".  © 1996-2020, Dusty Groove, Inc.
(Out of print.)