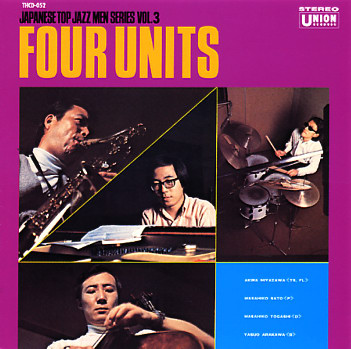 Some of the most arch-modern work we've ever heard from Japanese reedman Akira Miyazawa – proof that even though he was one of his nation's greatest straight jazz sax players in the 60s, he could also open up experimentally too! Akira's playing both flute and tenor here – and he's working with a quartet that features piano and arrangements from Masahiko Sato – who's clearly the key modern influence on the session. Many tunes have a slightly tentative, almost improvised feel at points – sound building in the space between the piano, the bass of Yasuko Arakawa, and the drums of Masahiko Togashi – often given strongest focus by Miyazawa's horn. Tracks are all somewhat longish, and the titles are in Japanese – and the set was released as part of the "Japanese Top Jazz Men" series from the Union label – definitely a good indication of the energy going on here!  © 1996-2021, Dusty Groove, Inc.