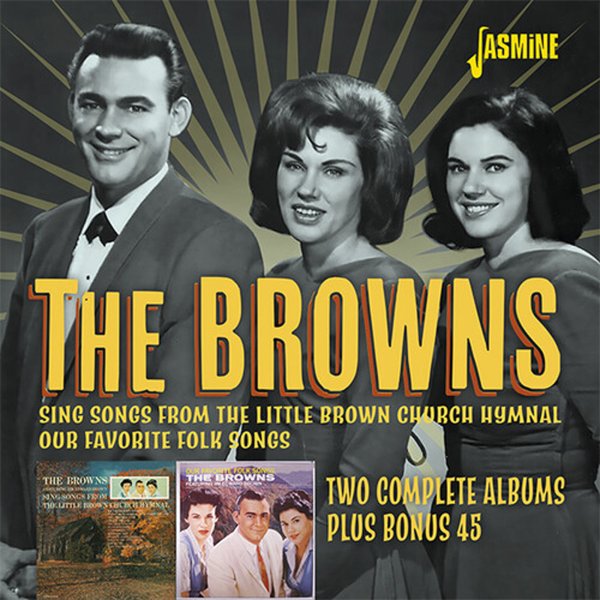 Two fantastic early albums from The Browns – one of the greatest country harmony acts of all time! First up is Our Favorite Folk Songs – a set that maybe has a bit more of a stripped-down vibe than some of the other records by The Browns – stronger acoustic guitar, which is matched by the superb vocals of Jim Ed Brown and sisters Maxine and Bonnie! There's some slight traces of RCA production, but in keeping with the title, things are nicely and folksy – very up-close, which makes the vocals even more stunning – on titles that include "My Pretty Quadroon", "Pretty Wildwood Flower", "Columbus Stockade Blues", "John B Sails", "In The Pines", and "Down In The Valley". The Little Brown Church Hymnal has The Browns in the kind of spiritual territory that always served their vocals so well – often harmonizing with a slight bit of organ in the mix – never too churchy, but enough to evoke the spirit of songs – as the trio harmonize beautifully through "Just As I Am Without One Plea", "In The Garden", "An Evening Prayer", "Whispering Hope", and "When They Ring Those Golden Bells". CD also features bonus tracks – "Send Me The Pillow That You Dream On" and "You're So Much A Part Of Me".  © 1996-2021, Dusty Groove, Inc.