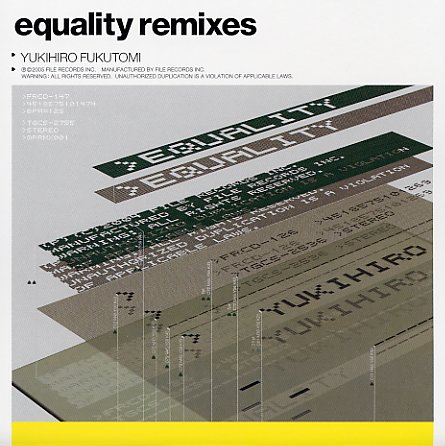 One of those great cases where a remix album is almost completely different than the original – thanks to the host of creative talents brought in to handle the set! Yukihiro Fukutomi's original Equality album was certainly one of our standout favorites of 2004 – and the album's got so much power, it's still breaking all over the world at a later date. So leave it to Fukutomi to arrange for a set of new takes on the album's tracks – cast in a way that almost make us feel like we're getting a whole new record, but still retaining enough of the elements of the first to remind us why we liked it so much! Vocals are by Lady Alma, Rich Medina, Isabelle Antena, and Ernesto – and titles include "Equality (Ysst rmx 2005)", "Hooked (Jazztronik rmx)", "Continuous Function (YF's another mix)", "Is It (Breakthrough rmx)", "Peace (Dim's backtrackin rmx)", "Love Is To Blame (contemporary house mix)", and "Peace (Mark De Clive-Lowe rmx)".  © 1996-2021, Dusty Groove, Inc.
(Out of print.)