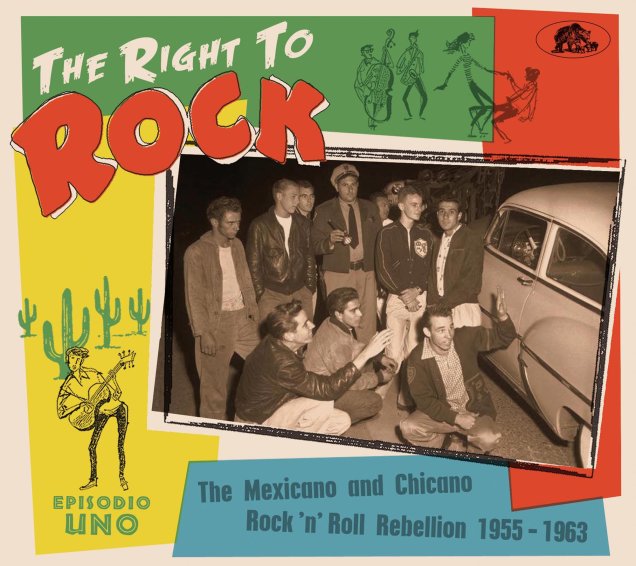 One of the coolest overviews of early Chicano rock we've ever seen – a set that really lays the groundwork for some of the bigger music to come – but with the sort of deep-digging style we love on other compilations from the Bear Family label! Most of this work was recorded in LA – but there's also tracks from Mexico City, Memphis, and Dallas – served up in a mixture of English and Spanish vocals, and all with the kind of searing intensity that often made the East LA scene such a hotbed of music as the 50s moved into the 60s – an underground that was often much farther from the mainstream than any of the early rock worlds of Memphis or points down south. The mix of material is great – a few covers, great original material, vocals and instrumentals – in a huge set list of 37 tracks all supported with the deeply detailed notes and vintage images we love from Bear Family. Titles include "Rock Little Darlin" by Max Uballez, "Rockin Blues" by Chris Montez, "Fast Freight" by Arvee Allens, "Come On Let's Dance" by The Carlos Brothers, "La Plaga" by Los Teen Tops, "La Chica Alborotada" by Los Locos Del Ritmo, "Maybelline" by Armando Almendarez, "La Paloma" by Tito Guizar & His El Rancho Rocks, "Denise" by Chuck Rio, "Dooby-Dooby-Wah" by Ritchie Valens, "Slow Down Sally" by Eddie Quinteros, "Hi You Silver" by The Augie Garcia Quintet, "Sarah Lee" by Bob Orrison, "El Vampiro" by Los Gibson Boys, and "South Of The Border" by Mando & The Chili Peppers.  © 1996-2021, Dusty Groove, Inc.