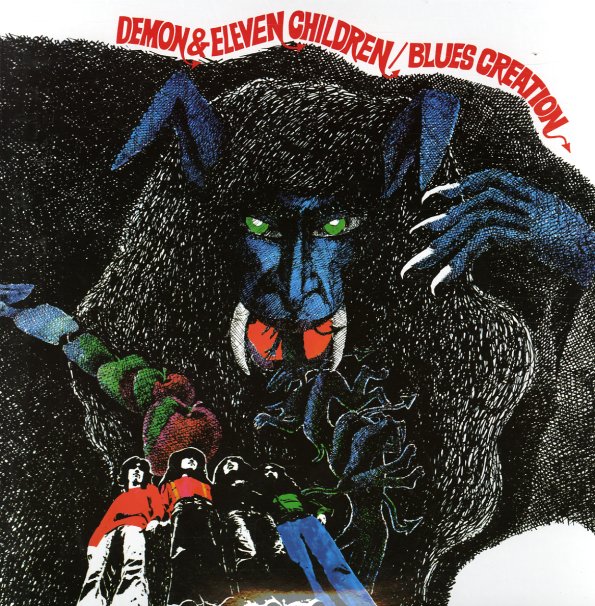 A mindblowing set from early 70s Japan – and a record that's every bit as sinister as you'd guess from its title! Blues Creation certainly started out with a blues influence in their music, but like some of the headier British groups of the moment, they've turned that love of guitar lines and heavy rhythms into some much more brooding territory – hard rock, but with a current of evil that was never in their inspirations – almost as if these guys have shaken off the blues, and are ready to show the world that they're a force to be reckoned with! The guitar work is superb – really top-shelf classic jamming level – and titles include "Atomic Bombs Away", "Demon & Eleven Children", "One Summer Day", "Brane Baster", and "Just I Was Born".  © 1996-2022, Dusty Groove, Inc.

Blues (180 gram pressing)
Sony, Late 60s. New Copy 2LP Gatefold
LP...$30.99 32.99
The brilliant bluesy side of Hendrix – great stuff recorded from '66-'70 – including his most blues based originals and incredible covers! Bluesy it is, but it's also Jimi – with the soaring, loose and massively influential lead guitar grooves and many of which went unreleased ... LP, Vinyl record album

Never Mind The Bollocks (neon green vinyl pressing)
Rhino, 1977. New Copy (reissue)
LP...$25.99 26.99 (LP...$34.99)
The only real full length document ever issued by the Sex Pistols – an album that came out almost as the group was falling apart – yet one that's still gone on to have a hell of a place in rock and roll history! There's no denying the power of these songs, even all these many years ... LP, Vinyl record album

Clear Spot (clear vinyl pressing – with bonus tracks) (2022 Black Friday Release)
Reprise, 1972. New Copy 2LP Gatefold (reissue)
LP...$40.99
Maybe not as nuts as some earlier work by Captain Beefheart & The Magic Band – but a pretty damn great record nonetheless – especially when compared to most of what was hitting the record racks in 1972! The Captain's still got all his wild and unbridled elements fully in place ... LP, Vinyl record album

Ziggy Stardust & The Spiders From Mars (180 gram pressing)
Parlophone, 1973. New Copy (reissue)
LP...$24.99 27.99 (LP...$25.99)
Arguably one of the greatest rock and roll albums of all time – and the key flowering of the partnership between David Bowie and Mick Ronson! The guitars here are heavy – so much so that the record's always crossed over big with crowds who are always suspicious of Bowie's artier work ... LP, Vinyl record album