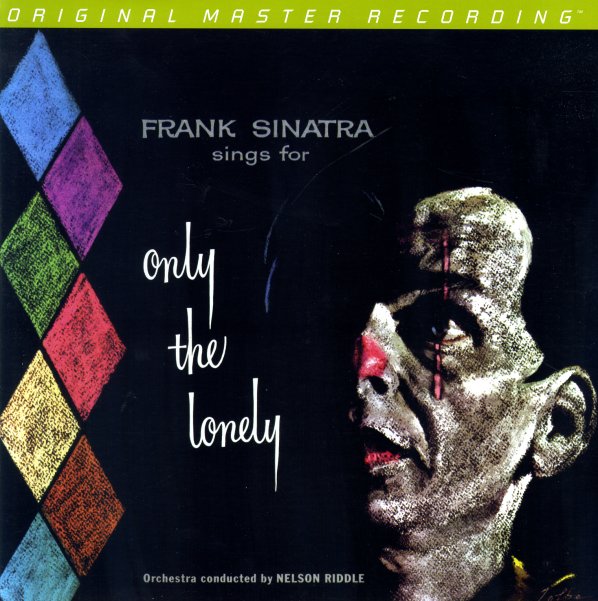 Only The Lonely (Original Master Recording)

One of Frank Sinatra's last great ballad albums for Capitol – a sad and dreamy batch of tunes that kicks off with the incredible "Only The Lonely" – one of those Sinatra torch songs that's so great, so sad, nobody else has ever been able to record a better version, nor have they really tried! The rest of the album's great, too – with arrangements by Nelson Riddle that are very much in the Wee Small Hours mode – expressive, but subtle and sophisticated – at that level that set Sinatra so far apart from most other male singers of the 50s. Despite the creepy cover, there's a mature, adult approach to the whole thing – a new level of emotion that most other singers wouldn't find for a decade. Titles include "Only The Lonely", "Angel Eyes", "What's New", "Ebb Tide", "Spring Is Here", "Goodbye", and the sublime "One For My Baby".  © 1996-2020, Dusty Groove, Inc.
(Out of print 24kt gold CD pressing from Mobile Fidelity – still sealed with the hype sticker!)

Call Of The Wildest/Wildest Show At Tahoe
Capitol (UK), 1958. Used
CD...$8.99
Two of Louie Prima's greatest albums ever! Both records are darn hard to find, and they're nicely presented back to back on this 2-in-1 CD! Call Of The Wildest features a cover that has Louie singing to a big moose – and the tracks inside are just as crazy, with loads of stunning swinging ... CD

Nancy Wilson/Cannonball Adderley
Capitol, Mid 60s. Used
CD...$4.99 (LP...$7.99)
The sweet vocals of Nancy join the classic Cannonball quintet for a great set of soul jazz tunes that was one of Capitol's biggest selling jazz sides in the 60s! About half the cuts feature Nancy on vocals – on tunes like "Save Your Love For Me", "Never Will I Marry", ... CD