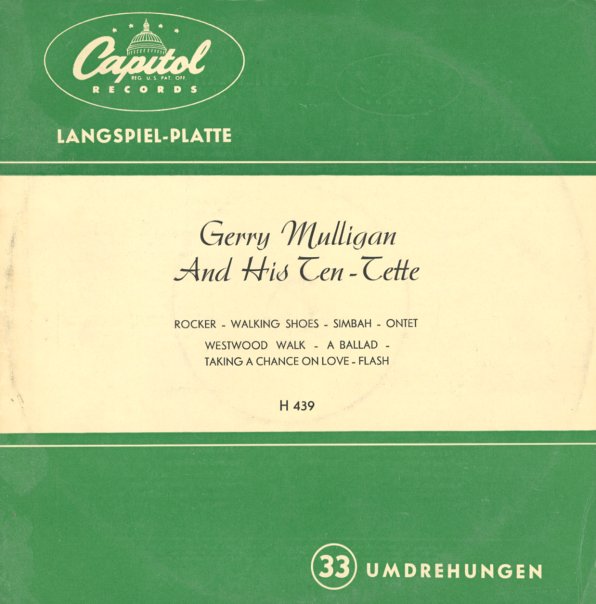 An early cooker from Gerry Mulligan – working here with a real birth of the cool-styled group that includes Chet Baker and Pete Candoli on trumpets, Bud Shank on alto, John Graas on French horn, Bob Enevoldsen on trombone, and Chico Hamilton on drums – a really wonderful group that has a swing that's might lighter than you might guess from its size! The set is nicely arranged throughout – an early example of Gerry's powers in this respect – with plenty of thought in each tune, yet never so much so that the proceedings get too academic. Titles include "Rocker", "Walking Shoes", "Simbah", "Ontet", "Westwood Walk", "A Ballad", "Taking A Chance On Love", and "Flash".  © 1996-2020, Dusty Groove, Inc.
(50s German pressing.)

Gerry Mulligan 63 – The Concert Jazz Band
Verve, 1963. Very Good+
LP...$6.99
The sound of Gerry Mulligan in the early 60s – and one of the best records by his larger than usual Concert Jazz Band! Given Gerry's piano-less experiments of the 50s, it's surprising to actually have him as the pianist on this session – hitting the keys with a nice light touch, so ... LP, Vinyl record album

Gerry Mulligan & The Concert Jazz Band Live At The Village Vanguard
Verve, 1960. Near Mint- Gatefold
LP...$14.99
A sweet little large group session from Gerry – a bit harder swinging than some of his mid 50s small group work, but still with that mellifluous glide that's the trademark Mulligan sound! Arrangements are by some great talents – including Al Cohn, Johnny Mandel, and Bob Brookmeyer, who ... LP, Vinyl record album

Concert Jazz Band
Verve, 1960. Very Good
LP...$1.99
Great large group material from Gerry Mulligan – and a record that definitely defines the sound of his famous Concert Jazz Band of the early 60s! The group features a four part sax section – headed by Mulligan, with other players that include Zoot Sims on tenor, Gene Allen on baritone, ... LP, Vinyl record album

Little Big Horn
GRP, 1983. Near Mint-
LP...$3.99
As close as Gerry Mulligan ever came to cutting an album of funky jazz – an electric-tinged set recorded with arrangements by Dave Grusin, who also plays electric piano on the set, which makes for an odd, but surprisingly pleasing contrast with Gerry's baritone. Tracks are long with smooth ... LP, Vinyl record album