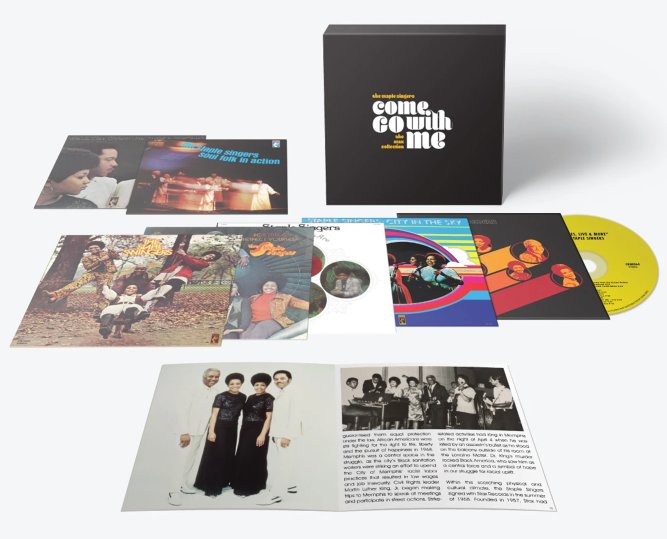 Legendary sounds from the Staple Singers – a set of albums for Stax Records that really helped push the group from the gospel folk underground into the soul music mainstream – and which also helped transform the rest of the scene in the process! The Staple Singers had recorded previously for Vee Jay, Epic, and other labels – but when the group hit Stax, at a time when the label was newly set free in the late 60s, the mix of forces really turned out to create something special – message-oriented soul music that drew on the strength of the group's gospel experience, but delivered themes that were every bit as righteous from a secular perspective too – all set to music from the great studio forces who were making Stax so wonderful at the time! This set features six full albums, all from the original tapes – Soul Folk In Action, We'll Get Over, Staple Swingers, Be Altitude Respect Yourself, Be What You Are, and City In The Sky – plus a special Singles Live & More album of bonus tracks! Bonus tracks include "Stay With Us", "Brand New Day", "Walking In Water Over Your Head", "I Got To Be Myself", "Oh La De Da", and "Trippin On Your Love" – plus Live At Wattstax recordings of "I'll Take You There", "Respect Yourself", "Heavy Makes You Happy", "Are You Sure", and "I Like The Things About Me". Comes in a heavy box, with all original album sleeves, remastered from the original tapes.  © 1996-2021, Dusty Groove, Inc.

For What It's Worth – The Complete Epic Recordings 1964 to 1968 (Amen/Pray On/Freedom Highway/Why/For What It's Worth/What The World Needs Now) (3CD set)
Epic/Soulmusic.com (UK), Mid 60s. New Copy 3CD
CD...$19.99
Mindblowing early work from The Staple Singers – six records that are quite different than their later fame on Stax Records during the 70s – and which have a vibe that's different too, yet equally powerful! There's a sublime mix of social politics and spiritual energy going on here ... CD

Spice Of Life
Cadet, 1969. New Copy
CD...$11.99 (LP...$22.99)
An amazing batch of sophisticated soul tracks – and a favorite with the righteous groove scene! On the surface, the record's a combination of jazz and soul tracks in the same mode that you'd find on some of Nancy Wilson's albums for Capitol during the same time – but digging deeper, ... CD