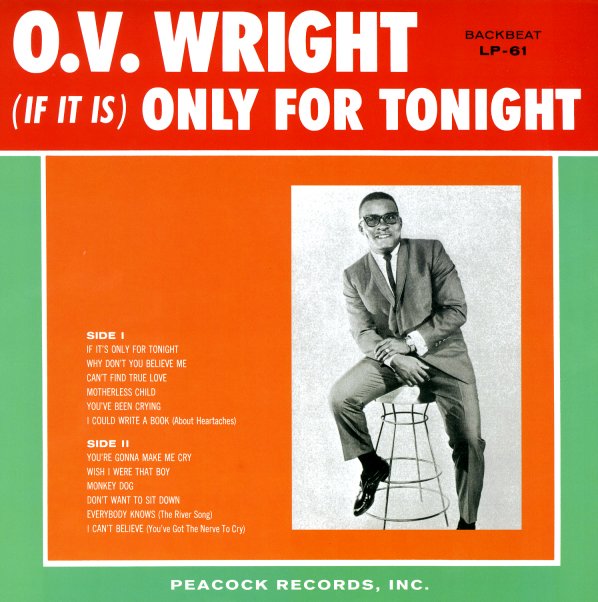 A strange reworked version of OV Wright's famous 8 Men album – presented here with slightly different tracks! An early high point in the career of OV Wright – the kind of "cut above" work that really got him noticed right away – a subtle blend of soul, blues, and more sophisticated styles – a bit like Bobby Blue Bland at his best, but sung in a much more sweetly soulful tone! The backings are great – rich and full of feeling, and never in a cliched sort of way – and the tracks are all great too – mostly lesser-known numbers that get past too-familiar southern soul standards. Titles include "Why Don't You Believe Me", "Don't Want To Sit Down", "You're Gonna Make Me Cry", "If It's Only For Tonight", and "You've Been Crying".  © 1996-2021, Dusty Groove, Inc.

All Things Happen In Time
MCA/Vinyl Masterpiece (Netherlands), 1981. New Copy
CD...$11.99
A post-Philly International album from Harold Melvin & The Blue Notes, but one that still keeps their groove very much intact – thanks to instrumental help from Norman Harris, Ron Baker, Vince Montana, Earl Young, and a host of other Sigma Sound talents! Although recorded in the early ... CD

Make Mine Bop
MCA/PTG (Netherlands), 1982. New Copy
CD...$11.99
The last record we've ever seen by this funky vocal combo – and every bit as tasty as their early work for Fantasy Records! Part of the reason for that is because the group's getting production here from Augie Johnson – who picked up plenty of funky jazz touches through his work with ... CD

One Way Featuring Al Hudson (1980) (with bonus tracks)
MCA/PTG (Netherlands), 1980. New Copy
CD...$11.99
One of the greatest albums ever from Al Hudson and One Way – a set that still has the group bristling with loads of funky energy – yet also hitting a groove that's wonderfully smooth as well! One Way were really one of the top of the larger funk combos of the time – and this set's ... CD

Who's Foolin Who
MCA/PTG (Netherlands), 1982. New Copy
CD...$11.99
A classic from One Way – who're still going strong in the early 80s! The group's ace in the hole was always the great work of Al Hudson – a fearless leader who kept things funky, and who wrote in some great hooks to tracks that give them uncommon strength. Case in point is the classic ... CD