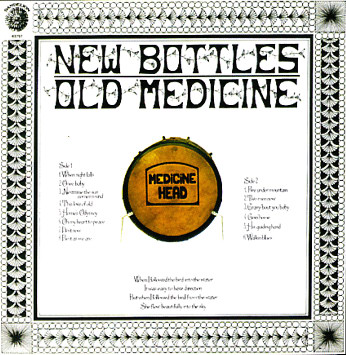 One of the most enigmatic acts on John Peel's legendary Dandelion Records – a north country duo with a really heady sort of sound! As you might guess from their folksy name, Medicine Head have a bit of an American roots thing going on – traces of blues and folk, often played in a fairly stripped down way – but also recorded with some much more contemporary styles overall, in keeping with the groundbreaking sound of Dandelion. There's a real focus on sound textures here – with production that kind of brings the bottom up to the top of the mix, and creates a rumbling, grumbling sort of presence even on some relatively mellow numbers. Instrumentation is varied – but includes a fair bit of acoustic guitar, bass, and percussion – on tracks that include "When Night Falls", "Ooee Baby", "Next Time The Sun Comes Round", "Do It Now", "Home's Odyssey", "Oh My Heart To Peace", "Crazy Bout You Baby", and "Goin Home". 2CD edition features a full disc of bonus material – lots more tracks from singles, BBC live material, and more – including unreleased tracks! Titles include "Pictures In The Sky", "Natural Sight", "His Guiding Hand (single)", "This Love Of Old (single)", "Coast To Coast", "All For Tomorrow", "Pictures In The Sky (demo)", and live versions of "The Pig Stomp", "To Train Time", "Walkin Blue", "Two Men Now", "Home's Odyssey", "Oh My Heart To Peace", "Coast To Coast", and more!  © 1996-2021, Dusty Groove, Inc.