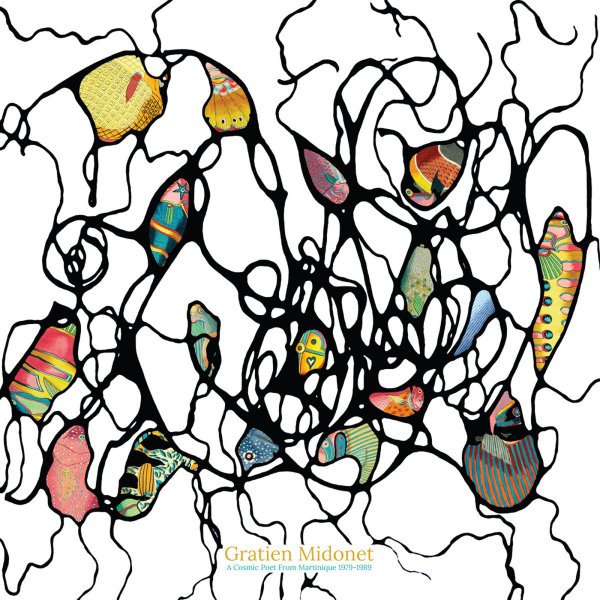 A record with a very evocative title, and a sound that's even more so than you'd guess – definitely cosmic, way more than poetry, and filled with rhythms from the native scene of Gratien Midonet! The music was recorded in France, as part of that great cultural criss-crossing that happened in the scene during the 70s and 80s – when talents from the old colonial strongholds were able to take advantage of some of the better recording opportunities offered in Paris – on a scene that was very open to new sorts of musical experiments! The tracks here are from four different albums, and have this playful mixing of roots and contemporary elements, sung and spoken passages, acoustic percussion and electric instrumentation – all very much in the spirit of some of the best early experiments of the Saravah label. Titles include "Antille O Cristal", "Osana", "La Point De Neg", "Zandoli Leve Doubout", "Roulo", "La Reine", "Mari Rhont Ouve La Pot", and "Kannaval Sakre Pou Tout Z'Heb Pousse".  © 1996-2023, Dusty Groove, Inc.

Africa Negra – Antologia No 1
Bongo Joe (Switzerland), 1980s. New Copy 2LP Gatefold
LP...$36.99 39.99
A collection of work from one of the biggest bands on the scene in Sao Tome & Principe years ago – combo who rocked the small island nation with a great blend of West African modes and more tropical sounds! The guitar work is often very lively, and percolating strongly with the rhythms ... LP, Vinyl record album

Love Affairs
Tambourine Party (Netherlands), 1981. New Copy (reissue)
LP...$29.99 39.99
A very soulful little group from the Nigerian scene – one who've got a sound that's as much American electro soul of the early 80s as it is some of the other West African music of the time! The group features really nice interplay between the vocals and the keyboards – the latter of ... LP, Vinyl record album