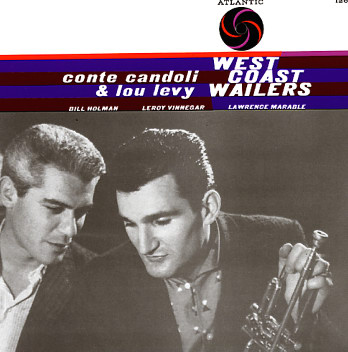 A lost west coast gem from the 50s – a unique quintet session for Atlantic Records, cut by a group co-led by trumpeter Conte Candoli and pianist Lou Levy! There's a bit more fire here than in some of the other sides from the time by the players – especially Levy – and in a way, the record goes a bit farther past the limits of Candoli's Bethlehem sessions, showcasing an especially searing sound in his horn! Other players here include the great Bill Holman on tenor, Leroy Vinnegar on bass, and Lawrence Marable on drums – and titles are all hard and short, and include "Marcia Lee", "Pete's Alibi", "Jordu", "Cheremoya", and "Comes Love".  © 1996-2020, Dusty Groove, Inc.
(Out of print, 2017 SHM-CD pressing – includes obi!)

Featuring The Legendary Hasaan
Atlantic, 1965. Used
CD...$8.99
A very unusual album from Max Roach – and one that continues his great 50s trend of seeking out some of the freshest players in jazz! The set's a rare trio outing for Max – and it features some incredible piano work by a musician named Hasaan – a player we only know from this set ... CD